Since 1999, we have been developing the BIOS Optimization Guide, affectionately known as the BOG. From a meagre beginning of a single page, it now covers over 440 BIOS options. As old BOG readers will know, we started offering two editions of the BOG since Revision 8.0 – a simplified edition and the complete edition.
Normally, the complete edition is only available to subscribers who help sponsor the development of the guide through a small fee. However, that changes today! From now on, we will post a BIOS option from the complete edition of the BIOS Optimization Guide every weekend.

This week, we will be taking a look at the AT Bus Clock BIOS setting. Here’s an excerpt :

“The AT bus is nothing more than another name for the ISA bus. The ISA bus was originally an 8-bit bus running at just 4.77 MHz. It was then expanded to include a 16-bit bus running initially at 6 MHz and later at 8 MHz. Eventually, the ISA bus was standardized to run at a maximum speed of 8.33 MHz.
Because each ISA data transfer takes anywhere from two to eight clock cycles to complete, this yields a maximum bandwidth of only 4.77 MB/s for 8-bit cards and 8.33 MB/s for 16-bit cards.
This BIOS feature allows you to select the ISA bus’ clock speed. The chipset actually generates…“ 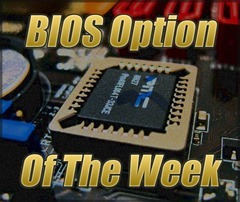