The Silencio series cases from Cooler Master are built for silent operation with sound dampening materials to help eliminate noise while maintaining excellent cooling performance with quiet fans. These cases feature elegant looks along with minimalist aesthetics to complement the silent design. Since the release of the Silencio 652, users wanted something quieter while keeping the same body design. Now, Cooler Master has released the Silencio 652S. Instead of a single 180mm front intake fan, they replaced it with three of their new Silencio FP-120mm fans that run at 1200+200RPM at just 11db; two of which are at the front and one at the rear. Everything else stayed the same, such as the front and top I/O ports, the removable cover for the side vent, and the overall body itself. Let’s jump into the features and specifications of the Cooler Master Silencio 652S. 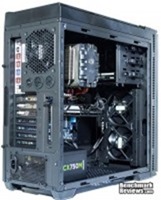