” The Raijintek Tisis is a massive dual tower CPU cooler with twin fans, five big heatpipes and a kick-ass-and-take-names kind of look about it. It also has a pretty major design flaw which we’ll get to in a moment. The Tisis stands upwards of 168mm tall, weighs 1050grams and ships with a pair of 140x150mm PWM fans that spin at 1000-600RPM to drive up to 70CFM air through the unit. The heatsink itself is constructed around five 8mm diameter copper heatpipes which are equidistantly spaced through two separate, 110mm tall aluminum fin stacks of differing thicknesses.”
URL: 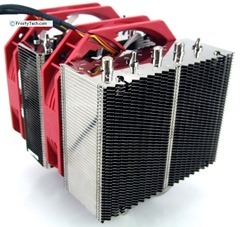