Drive enclosures aren’t anything new and neither are hot-swap drive bays, but it is rare that we see the two combined in the way Silverstone has done with the MS06 2.5-inch USB 3.0 HDD/SSD enclosure with 3.5-inch hot-swap drive bay. Now that’s a really long name, so I’ll just refer to it as Silverstone MS06 from now on.

It is great to have a drive in an ejectable enclosure so you can take it with you on the go, but it isn’t everyone that has the same docking system. In fact, it will most likely be difficult to find anyone among your friends who uses the same system. At least this is the case when we talk traditional hot-swap bays. To combat this issue, Silverstone created their MS06 enclosure on a pure USB 3 basis that in return allows for full compatibility with almost any system. When you leave your home, you just press the eject button, grab the drive and the included USB3 cable and you ready to head out on your adventures. 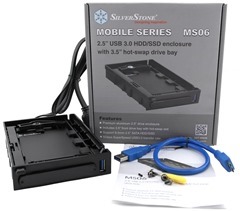