Around a week ago while i was driving on the right lane and minding my own business the person driving a car in the middle lane decided to cut me off and if i was going any faster than i did chances are i might be typing these lines from the hospital right now. Luckily i wasn’t so i managed to avoid his car hitting mine just in time. The funny thing with that incident was that had he hit me with the rear end of his car he might had gotten away with it based on the current laws in my country. Now although i always have a dash camera installed (usually for testing purposes) in the car the courts don’t really accept such evidence, officially that is. Unofficially however it’s up to each judge to decide on whether or not he will see/accept such evidence so having a dash camera installed in your car can certainly come in handy. The Marcus 1 by VicoVation is one such car dash camera and today we’ll be putting it to the test. 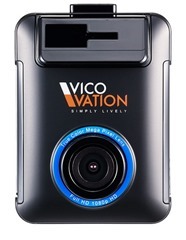