America has always strived to do things bigger and better than anywhere else. This is reflected in their attitude towards sport, with competitions like the “Worlds Series” and stadiums with a capacity of 100,000. Generally speaking, American sports are biggest within the U.S., so you’d think soccer stadiums in Europe and throughout Latin America would top the list, as it’s a global sport – but you’d be wrong. The biggest soccer stadium is the Camp Nou in Barcelona, which seats up to 100,000. There are a few other mammoth stadiums, the Rungrado 1st of May Stadium in North Korea and the Melbourne Cricket Ground (MCG) in Australia. 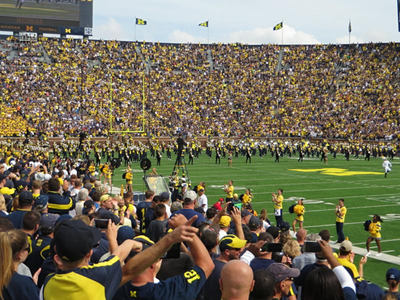 The love of college football in America attributes to all of the stadiums that feature in our list. For those that don’t know, college football is more popular than the NFL in the United States. College football offers locals the opportunity to root for a team they’re connected to rather than following a major league, where players and fans come from all over the world. The connection fans have to the team is what fuels the popularity of college sport.

We’ll talk briefly about the stadium and the team that plays in it, going into detail about the history and capacity of each field. So, without further adieu, let’s take a look at these gargantuan stadiums.

At the top of our list and one of the oldest stadiums that will feature is home to the Michigan Wolverines. First constructed in 1927 with some 70,000 seats, with the stadium being designed for an extension allowing up to 150,000 spectators. While this dream was never fulfilled, it did allow construction to resume and the Ann Arbor stadium grew to its current capacity over the years. Otherwise known as “The Big House”, the Michigan Stadium underwent renovations in 2010 bringing the capacity to its current state. It’s not one of the most accessible stadiums in the U.S., but it makes up for that with its sheer size.

Next, we travel South East of Pennsylvania to the Beaver Stadium, which is the home of the mighty seven-time winning Penn State Nittany Lions. The stadium was first opened in 1960, built on the foundations of a 1909 stadium that was dismantled and moved to the current site. The stadium has undergone a variety of small renovations over the years, with the most significant coming in 2001. The name “Beaver” is dedicated to the honor of a lawyer who fought for the Union Army in the Civil War and was a huge part of Pennsylvania history during that period. Beaver stadium now boasts over 100 rows in the East and West, making for a truly colossal sports area.

The third largest stadium is located in Columbus and is home to the Ohio State Buckeyes. Known as “The Horseshoe” and boasting great historical significance, having first opened in 1922 on the banks of the Olentangy River. The classic style we saw back in the 1920’s has since disappeared, as the demand for more seats has increased. The iconic horse shoe design was closed off back in 2001, when permanent seats were installed and the capacity was drastically increased. 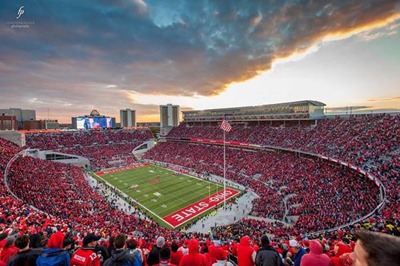 “Ohio Stadium at Sunset” by fensterbme is licensed under CC BY-NC-ND 2.0

Next up we have Kyle Field, which fields the 9-time winning Texas A&M Aggies. For a long time, the stadium had a capacity of just over 80,000. But back in 2014 the stadium underwent a major redevelopment, which lifted the capacity to just shy of 103,000. The stadium is the oldest on our list, first opened at the turn of the 19th century in 1904. Kyle Field was developed by a horticulture professor named Edwin Kyle, who purchased a grandstand and developed it into a makeshift football field. It wasn’t some years later until 1927 that the structure was properly developed.

The final stadium in our list is located in Knoxville, Tennessee, and is home to the 6-time national title winners the Tennessee Volunteers. Development on Neyland Stadium started back in 1921 under the name Shields-Watkins Field and as it grew it encompassed the other venue that was nearby acquiring the name Neyland. As a result, it became the 102,000+ seat stadium we see on the Tennessee campus today. Over the lifetime of the stadium, it has undergone numerous developments taking it from 3,200 seats in 1921 to the 102,455 we see today.

← Your Marketing & Advertising Budget Needs To Be Spent On Something That Works.
How Has Technology Influenced Our Everyday Life? →