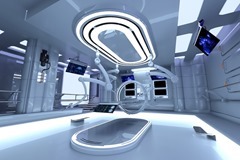 The genre of science fiction, by definition, is supposed to revolve around mostly fictional concepts. However, as technology continues to advance and bring humans close to an exciting but possibly strange cyborg future, sci-fi and reality are slowly becoming one. While we still haven’t seen the widespread commercial adoption of flying cars – one of the expectations that futurists have been clamoring over for decades – there are even a few of those waiting to be discovered by savvy buyers in today’s absurdly diverse tech market.

Contrary to the common complaint that “we still don’t have flying cars yet,” we not only have them already, but hoping for them by the year 2020 was actually a dramatic underestimation of the progress that we’ve made in the first two decades of the 21st century. In fact, here are 7 emerging technologies that are set to make most sci-fi concepts a reality within the next few decades:

Not having to drive yourself around feels like it would be an incredible convenience, but beyond that it’s also set to change the way we spend our time commuting. That alone is going to have a huge butterfly effect on human productivity because people waste a lot of time just driving around. Of course, you can’t really do much when you’re continually occupied by the responsibility of having to steer your vehicle.

The clear benefit of not having to drive is probably going to lead to a nearly universal adoption of this technology within the next 1-2 decades. Thus, we could soon see a Jetsons-like future in which people are effortlessly transported around without ever thinking twice about it. That also means that this is a very exciting time for students who choose to pursue a degree in computer and electrical engineering with a specialization in advanced mobility and autonomous vehicle systems.

The ability to change the way we see the world around us and virtually exist in other realms has been an intriguing part of sci-fi since the 1980s. The movie Ready Player One hints at a future in which people are more enamored by the virtual world than they are with their actual lives in the real world.

As urban crowding, pollution, poverty, and other societal stresses continue to make everyday life a burdensome experience for many people, the introduction of fully immersive virtual realities that are more enjoyable in every way than our own could very well lead a significant portion of the population into becoming headset-wearing zombies, while simultaneously enriching their lives.

3D printing might not seem amazing enough to be considered real-life sci-fi on the surface, but when you consider the implications it could have for the future, it might just wind up being the most impactful invention of all time. Who cares about the ability to print 3D models, you say? Well, researchers have figured out how to 3D print certain body parts in a lab. That means that one day within the next century or so, people could be printing replacement body parts and living for hundreds or even thousands of years.

Then, consider the fact that 3D printing could facilitate a form of pseudo-teletransportation, in that an object could be scanned on the molecular level, and then printed out in a completely different location. You might not be able to replicate an entire human body all at once, but you could easily “teletransport” household items and gifts to remote locations in their exact form.

The ability to create entirely new creatures and plants is another concept that was commonly seen in sci-fi movies and comic books like X-Men or The Incredible Hulk, in which genetic experiments and mutations gave people superhuman capabilities. That was once a fictional concept, but now with the advent of CRISPR gene editing technology, the idea of creating human-animal chimeras or humans with special abilities or traits is now within the realm of possibility.

Artificial intelligence is something that seems a long way off but it actually already exists in many forms. Advancements in machine learning have let companies like IBM and Google build programs that can beat humans in chess and other advanced games. IBM’s Project Debater can even debate against real humans on a university level. As more narrow AIs are created each year, we’re getting closer to a future in which a general AI might be able to do just about anything a human can do with equal or superior proficiency.

Quantum computers are a confusing topic because most people don’t even know what the word “quantum” means other than to say to it’s another word for something being “really, really small.” In computers, the term quantum refers to the use of 4 different components as opposed to the traditional binary approach of using only 1s and 0s in computer programming language. In a traditional computer, a bit of data can only be a 1 or a 0. In a quantum computer, a bit can be 1, a 0, or a 1 and a 0 at the same time, or a bit can even fluctuate back and forth between being a 1 and a 0. Ultimately, these extra dynamics may let engineers create much faster and smaller computers than we could have ever imagined.

While the aforementioned virtual reality does already encompass the field of graphics, simply having a headset and the ability to look around doesn’t create an immersive experience – it’s the realism of the graphics that really makes people feel like they’re looking out at a different world. With the next generation of gaming consoles set to be released over the next couple of years, it’s likely that the console generation after this one might have convincing enough graphics to create the impression of a separate reality.

All Science Was Fiction at One Point

If you think about it, every technology that we take for granted today would have once been considered an outlandish fantasy if described to people from a different era. The very fact that we have televisions, smartphones, and the internet should let you know that there is a very fine line between fiction and the things that science can make possible.