If there is any single truth about modern life, it is the fact that our smart devices just keep getting more powerful. As the devices get more powerful, they develop a hunger for more bandwidth and bigger chunks of data. Of course, the good news is that our devices do more for us than ever before, and they serve us in ways that seem to increase daily. But we have to pay the price. 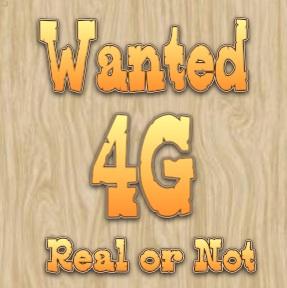 That price is in service from a data provider and from any of the major carriers available in the area. Currently the majority of users buy data at 3G speeds, and they don’t usually think about how much data they get for the money – it is after all 3G, a standard that is clearly defined by the International Telecommunications Union (ITU). And the “G” stands for “generation”, so you would think that going from 3G to 4G would be a no-brainer, right? The standards are defined by the ITU, and it is the next logical generation of mobile data capability.

But not all is as it seems when it comes to wireless carriers and 4G. In fact, things are downright shifty. Take, for example, AT&T’s 4G network. The big change in AT&T’s network is in, you ready for this – the name. Apparently some executives at the AT&T marketing department decided that 4G would sell better than lowly 3G, so AT&T was born.

Now, the network that AT&T runs is HSPA-plus, but as early as September this was their 3G network. Since then AT&T has a big new slogan – “The nation’s fastest mobile broadband network” – and a big new 4G sign on their website. When new AT&T phones roll out this year, you can expect 4G to be prominently displayed. Now, AT&T is spending a lot of money to put Long-Term Evolution (LTE) in place ahead of its original 2013 schedule, but customers will not see a difference until that time.

AT&T is not the only carrier to re-brand their current 3G network as 4G, and in fact, they are not even the first. Earlier T-Mobile USA, who uses the same HSPA-plus technology as AT&T, re-branded themselves as a 4G network. The ads that soon followed bragged on their 4G technology at the expense of other carriers, particularly AT&T. Ironic, isn’t it?

Especially when T-Mobile’s new ad is “America’s Largest 4G Network”, which it isn’t no matter how you try to define it. In fact, while AT&T has plans to roll out LTE, T-Mobile has no immediate plans in the works. The only advantage they have is in the short term, being the first to rebrand their existing HSPA-plus 3G network.

But how can wireless carriers so easily rebrand existing technologies as 4G, when the ITU is defining exactly what makes 4G. Well, therein lies the rub – there isn’t a firm definition as to what exactly makes up 4G. The group is working to formalize one, but in the meanwhile (last December, to be more exact), they gave the go ahead for the branding of advanced 3G as 4G. And the carriers jumped at the chance.

Will the Real 4G Stand Up

In the meanwhile, Verizon and Sprint have products that could be considered real 4G technologies. Sprint has a 2 year head start with rolling out its WiMax technology to customers, and Verizon rolled out LTE in December. Both of these technologies are superior to HSPA-plus (which, as you remember, was originally branded as 3G).

When it comes to 4G, the consumer is left bewildered and unsure of exactly what they are buying into. As it is, the expectation of what speeds should be 4G is as fuzzy as the 4G definition itself. So what should a buyer expect?

The best advice at this time is for the consumer to not put a lot of weight into the 4G tag, especially when it comes to AT&T and T-Mobile. When these networks get around to rolling out their advanced products, hopefully sometimes in 2012 for AT&T, then perhaps it may mean something. Until then, don’t let expectations of the 4G label rope you into new contracts or expectations. Especially when it comes to new contracts, which may even extend far enough to make the 4G claim eventually real. It’s nice of you to foot the cost up front.

12 comments for “Think Before You Buy 4G”