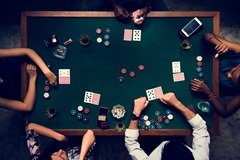 When playing Poker, online or offline, you’ll come across a number of different players. The best players are not only those that are able to read their opponents and their ‘tells’, but the ones that can identify each player’s personality and style of play. Some players are easy to beat, while others are a lot more difficult. But don’t fear, here we will identify the different types of poker player and how to beat them. The next time you play poker online, you’ll know what style of gameplay to employ and what move to make.

How to spot them: Rocks are an extreme type of Poker player and are easy to spot. They rarely play a hand, because they are waiting for the best. You’ll know they’ve got this when they suddenly pipe up during a game and are guaranteed to win the hand.

How to beat them: Don’t be an idiot, as this is how their playing style thrives. Ignore them, attack their blinds at every opportunity and if they call your pre-flop raise, take them down.

How to spot them: Nits aren’t as extreme but are pretty prominent in Poker circles. Nits love to fold and rarely bluff; they try to play good Poker but don’t understand tight play.

How to beat them: Play aggressively, as this is when they are likely to fold under pressure. Pre-flop, they’ve probably got a solid game plan, so the best move to make is to wait until after the flop and watch them struggle – and wish they’d folded sooner.

How to spot them: Maniacs are exactly that, wild. They play a loose and aggressive game. They will try and get you to tilt, in order to boost their bank roll. Maniacs are also likely to be the biggest bluffers, but let them bluff.

How to beat them: Refrain from tilting, obviously. Keep cool and follow your strategy. To counter their loose play, play tight; induce as many bluffs from them as possible, but be sure to refrain from bluffing yourself.

How to spot them: Sharks are the craftiest players and are tight-aggressive (known as TAGs). Sharks are good at all aspects of the game of Poker and can easily adjust their style of play to suit any opponent – this is why they are the best.

How to beat them: Play them at their own game. Take a balanced approach, evaluate the table and think logically. Sharks are often cool and calm, even in the worst situations. If you are able to assess the dynamics of a game and adapt to them, you’re already at a huge advantage over the other players and on your way to defeating a shark.

How to spot them: Donkeys are easy to spot as they generally haven’t got a clue – they’re the type of player to make a move that doesn’t make any sense. They don’t really have a game plan. They will bluff, they will play loose and passive, and their mindset and irrational moves will get others to tilt.

How to beat them: Easily – you don’t need a game plan here. Just play your standard game and over time, you’ll pick them off. Watch their moves carefully and act aggressively when you need to. The key takeaway from playing against donkeys is to avoid tilting.