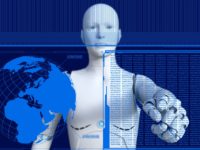 Up until now, industrial robots are known to be large, loud, expensive and somewhat dangerous to its human colleagues. Also in most cases, they aren’t environmentally friendly and end up causing health complications to those who work with them. This has changed with the introduction of the Universal Robots collaborative robots, or as they are commonly referred to as, cobots.

Cobots are small robotic arms that can perform the function of numerous large machines. It can be custom programmed to perform many different functions at a go. All the while, still being able to interact with its human colleagues in a safe environment.

The food industry is one that has developed technology to aid in its functions. Despite this fact, the machines that are there are expensive, absurdly large and not safe to work alongside the other employees.

Universal robots are now changing this common narrative. Their lightweight, safe and affordable robots are breaking the automation barrier that exists. This makes the machines ideal, even for small and medium enterprises (SME’s) who in the past, couldn’t afford these machines.  They increase the business’ competitiveness, especially in an industry where there is a high turnover rate for employees.

The processing, handling and packaging of food items is extremely sensitive. Cobots promise efficiency at work because, unlike humans, they do not get tired or need breaks between working. They can also function in low oxygen levels and temperatures up to 50 degrees. These environmental conditions are not conducive for human workers and would therefore need expensive machinery to make working conditions conducive for their employees.

Incorporating cobots into the health care sector has proven to increase the success of highly complex surgeries. Human is to error but machines aren’t. The robot arm follows the commands given to the letter. Surgeons that have used the universal robots as surgical assistants have agreed that less mistakes have been made and it delivers the utmost precision.

They aren’t just used in the theatre rooms. The cobots are also used as service assistants in the hospital. Physiotherapists and Chinese acupuncture have also found use for these gadgets. When programmed correctly, it can be used to perform targeted muscle massages that help in recovery and rehabilitation of patients.

The UR10 robot, for instance can assist nurses in carrying out heavy load tasks during their rounds. It can be used to carefully lift or turn bed ridden patients. So as you can see, these robots are positively impacting the healthcare industry.

Agriculture is one of the first areas in which humankind used technology to make their workload easier. The other industrial robots are just as tedious as the ones in the food industry. For instance, the large machinery used to disinfect the cow udders before and after milking are complex, expensive and can possibly cause harm to the cows in the event of power failure. For the universal robots, all you need is one unit to cater to all these functions efficiently and in a very short period of time.

Universal robots are made to function wholesomely. They do not require any supervision. This has been proven by a successful lettuce farm that is completely manned by the cobots. They each have been programmed to do a certain function and it is as efficient as you can imagine.

The Universal Robots Company offers a free online course that is open to all. The company sees this as a long term investment which they will get back through employees. There is a skills gap in the manufacturing of these robots and although the system is super simplistic, its making is not. The company feels the need to close the gap, not just for their company but for the robotics industry in general.

The schools that incorporate this program into their syllabus, are provided with a handful of different robot arms for the sake of practicality. The Universal Robots Academy has six modules that aims to create masters in robot programming.

In summary, it is clear to see that these machines have been carefully designed to cater to everyone’s needs. This is the future of assisting robots and it hopes to continuously become better.