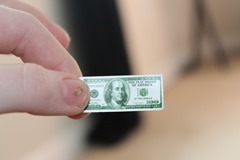 Fake bills are a big problem for retailers who accept a large portion of their revenue in cash. If you’re the owner of such a business, it’s time you invested in a reliable money checker machine.

Having a counterfeit money detection tool on your premises reduces your risk of losing the face value of any fake money received. It also protects you from the loss of the product sold to the customer with the counterfeit money.

In this article, we look at the methods you can use to tell whether bills you receive in your business are authentic or fake.

1. Use Your Naked Eye

If you can’t afford to buy a high-tech counterfeit detector, you can study the bills received to tell if they’re genuine or fake.

The drawback of this method is that it’s prone to human error. It’s also time-consuming, and most customers won’t have the time to wait for you to use such eye-balling techniques to check their bills.

But some of the ways you can use your eyes to check the authenticity of banknotes includes:

Check the texture – The Treasury Bureau of Engraving and Printing prints bills using the intaglio printing process. This method gives genuine notes, little ridges, or a unique embossed feeling. Simply run your fingernail over the face of any genuine bill, and you’ll feel some vibrations on your nail from the ridges on the note.  If the bill doesn’t have these ridges, it’s probably fake.

Check the bill border – The border of an authentic note should be clear and unbroken.  Due to the use of die-cut printing plates, authentic bill borders have fine lines and are incredibly detailed.  A fake note will have a blurred border without the same level of detail as an authentic note.

Check for color-shifting ink – An original bill printed from 1996 onwards will reveal color-shifting ink at the bottom right part when it’s tilted back and forth. Except for the $5 bill, all other bills have this security feature.

The watermark is a security feature found on authentic bills. Depending on when the banknote was produced, the watermark may be an oval or a replica of the banknote’s face.

Here’s how to check if your bill has a genuine watermark using the watermark lamp:

If the face doesn’t match the one on the bill’s face or there is no watermark, then the note is probably counterfeit.

A counterfeit detector is a standalone device that detects a fake bill when the note is inserted through it. Such detectors are kept close to the register and help provide instant verification to bills coming in.

The counterfeit detector can also be used to validate credit cards, traveler’s checks, social security cards, and passports, among other essential documents.

A currency counter with an inbuilt counterfeit detector scans each bill during the counting process to check for the authenticity of the banknote. This machine, although expensive, is excellent at spotting fake bills. It also saves time as you don’t have to check every single bill after counting.

The different ways these machines use to detect fake bills include:

Any business that accepts cash is susceptible to fake money. Hopefully, now you can protect your business from losses caused by fake money by using any other above counterfeit detection methods.