Virtualization is becoming a bigger factor in everyone’s computer experience, and one place it seems to be gaining popularity is a Windows client running on a Mac. This arrangement allows a Mac OS X user to have access to the huge Windows library of titles. So, it does make sense for a Mac user to at least consider virtualization as a practical tool.

As with most computing paradigms today, there exists a paid and a free option for virtualization. In this test we pit one of the most popular paid solutions, Parallel 5, with the free leader, VirtualBox 3. We compare the tools using an XP Client, and our test programs include Office programs (Excel and OneNote) and a CAD program (our favorite modeler, Rhino3D). We will also do a series of tests on core mechanics that is common across computing platforms.

Installation was very straightforward on both applications. Both install from a standard installation package after being downloaded, nothing out of the unusual. We installed a tsp version of XP to both machines, and loaded the programs to be tested.

The tests were run on a Mac running Snow Leopard with only 2GB of memory. This was chosen in order to get a typical real-world user machine, so hopefully your results will be something similar. Also, in order to compare the varying programs on what we felt would be a typical user experience, we toasted the programs with both virtualization systems running in seamless mode. This means that the Windows application ran in its own window on the screen beside its mac counterpart. 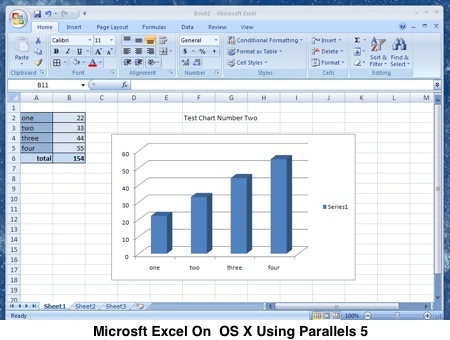 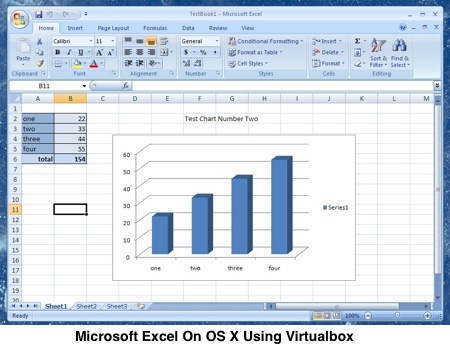 First up was Microsoft Excel. We ran through a basic use of using the spreadsheet program, including formulas, sorting, and charting. Both programs delivered a very pleasant experience, with fast screen updates and a quite usable interface. The winner here – a tie. 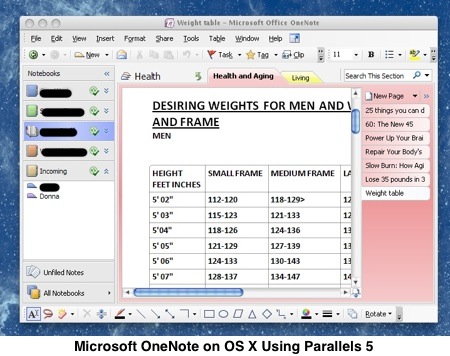 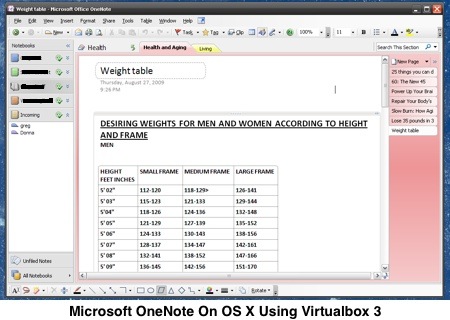 Next up was a what we feel is a great reason to look into Virtualization with XP, Microsoft OneNote. We tend to use OneNote a lot, but the feature that really makes it work is its syncing abilities across different machines. Typically the notebooks are kept on a network server, and the different desktops and laptops connect to them. At any given time we have several copies of any notebooks, all in sync. It is a sweet solution for a lot of data.

Sad to say, OneNote is not available for the Mac platform at this time. So, this would be a perfect test to throw at our packages. And, I have to say, both packages performed admirably. Both instances of OneNote had no problem staying synced with the network copy, and everything we tried, including recording audio notes, functioned great on both Parallels and Virtualbox. Again, it was a tie. 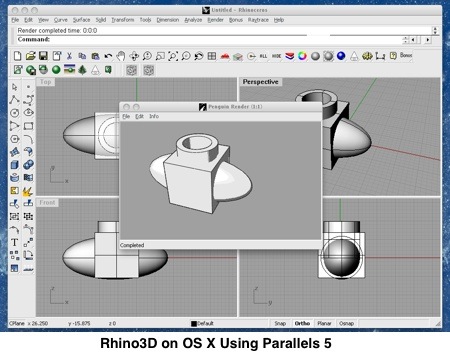 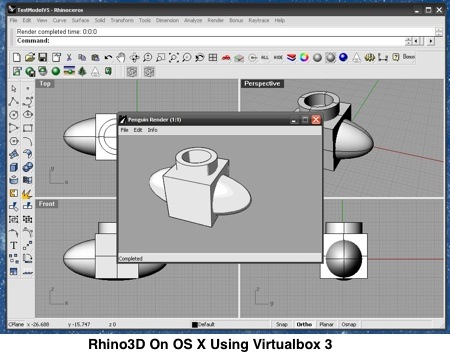 For our test we used Rhino3d, a great modeling package on the Windows platform. While it is in beta for OS X, there is not a commercial version available at this time. So, it makes a good candidate for a virtualization solution. We tried the same Rhino file on both platforms, and we had no problems running with either using the CAD program or rendering a scene. In fact, performance on both platforms was so smooth and responsive you could quickly forget that you were even on a virtual machine. The result – a tie. Are we starting to see a pattern? 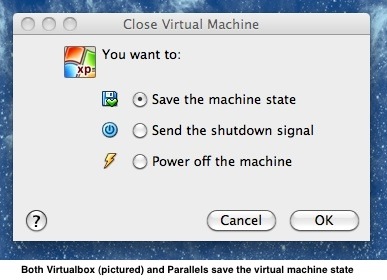 For this test we tried some simple but common computer mechanics areas, and at last we found some areas where one shined more than the other.

First up for computer mechanics, look and feel. While this is probably not a big deal to the bulk of the users out there, it does tend to measure how well it fits with the rest of your computing environment. In this test, while Virtualbox did a noble job of managing the windows in seamless mode, the “Mac Look” option found in Parallels gave a more seamless experience to the end user. Winner by a nose – Parallels.

Next we tried a simple cut and paste between the Mac host and the guest OS. This is where we had a clear winner. Despite claims otherwise, we could not get the Virtualbox client to copy from the guest back to the Host. With my typical use of OneNote including code snippets, losing the ability to copy from it into a work means losing access to a lot of resources that I would rather not do. Parallels 5, on the other hand, pasted bidirectionally without a hitch, including text AND graphics. The winner, Parallels.

Finally, we looked at importing machines from other vendors, and even from a physical machine itself. In this case, once again Parallels was indeed the clear winner. Its utility usage made Parallels a serious tool for anyone that was committed to virtualization and could have the need for supporting a variety of sources. The winner – Parallels.

Our tests came down to a very simple conclusion, and one that makes perfect sense. If you have the need for a virtual instance of XP on a Mac without the need for cut and paste or importing other virtual machines, then we would wholeheartedly suggest that you look at the free Virtualbox. Our experience with it proved to us that it has matured into a very stable platform that performed on par with many paid solutions available on the market.

Beyond that need, the adage :you get what you pay for” comes to mind. Outside of the cut and paste issue, which may be fixed in the next release of Virtualbox, the question really does come down to finishing quality nod extended ability. Our best suggestion – try Virtualbox first if you are new to the process. Then, if it does not work out, grab Parallels 5 and import the image, saving the need to redo the work. You will be up and running before you know it – virtually, of course.

← Tips and Tricks: Optimize Your Computer For Speed and Efficiency
Solar Technology Gives iPhone the Much Needed Power Boost →