Let me set the stage. The year is 2011. The tablet wars are just now heating up, with Apple being the conqueror to date, and every target manufacturer has the iPad – or rather the iPad 2 – in sight, with a bright red target in mind. Every tablet manufacturer is hoisting their wares to thinner and faster plateaus than ever before.

And then we have Samsung, with their popular Galaxy Tabs. If there are any real threats to Apple on the tablet market any time soon, it would appear to be Samsung. But despite having a strong tablet seller in the market, it would appear that Samsung is trying to be all things to all people while changing entire designs on a dime (or should I say at a peek of the iPad 2?) 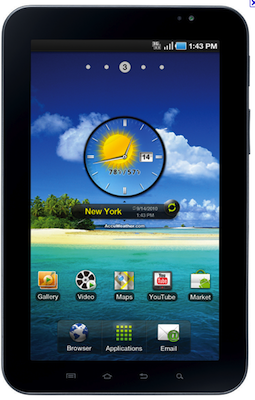 A Tablet For All Sizes

Apple’s strategy seems to be clear – a single product at a time, and focus their energies on that. Whether it is an iPhone, iPod Touch, or iPad, each product is designed to fit a specific niche. Sure, you can get variations when you factor in choices like memory (16 – 64 gigs) and connection (WiFi or 3G), but you still only have one iPhone or one iPad for the masses.

Samsung, on the other hand, appears to not be able to make up their mind. The Samsung tablet will be found in not one, not two, but three different sizes. Okay, maybe you have the 7-inch for the almost pocket-able tablet crowd, and the 10.1-inch for the media-consuming crowd. But then where does the 8.9-inch fit? Is this the confused consumer special?

Maybe there is some truth to the story that Apple has the bulk of the LCD screens locked up, and Samsung has carefully developed a strategy that allows them to buy whatever screen size is available that week for production. This week the 8.9s are free, then two weeks from now the 10.1 inches can be snapped up. Now that makes sense to me.

Put the Strain of Defining the Market into the Consumer’s Hands?

Maybe the tablet market is so new that Samsung is afraid to bet on a single product that will define it. Instead, maybe a meeting at Samsung went like this – “Consumers love choice, so let’s give them a choice. As a favorite is determined by sales, we’ll boost its production and scale back the others.”

Of course, I am being facetious. I have no inside knowledge of anything that happens behind closed doors at Samsung. But you have to admit that also makes sense when you weigh the evidence.

Samsung is Reactive, not Proactive

It would seem that Samsung is only being reactive in their approach to tablets, not proactive. While that may work for them when it comes to popular electronics in a defined market, it is definitely NOT market defining – something the tablet market needs right now.

Samsung is not only reactive with their approach to marketing, but apparently their design works the same way. Recently when Apple trotted out the iPad 2, Samsung dropped their freshly announced designs and went back to the drawing board, with one goal in mind – slightly better than existing specs from the market leader. Hardly defining of anything.

On top of their knee jerk reaction, Samsung hands out mockups to the journalists, claiming them to be the new tablets. The journalists take note of the thin builds and the slightly lighter weights, but everyone seems to ignore the fact that the new and improved Samsung tablets lack only one major feature – they don’t work. Yes, they never powered up. Now Samsung has defined their own niche market – either bring functioning devices to the market in a timely manner, or their bluff is called. The sad part is that this is probably the worse kind of reactive box to be in.

The Apple iPad 2 is selling quite well as of this writing, and it appears that the market just keeps expanding. The competition is expanding as well, with many very competitive challengers coming onto that market. But if Samsung is any indication, Apple has got the other tablet makers motivated, if not downright scared.

← Mayhem 3D Now Available for Xbox 360 and PlayStation3 System from Zoo Entertainment
Charge an iPod with Your Heart! →

2 comments for “What exactly is Samsung’s Tablet Strategy?”