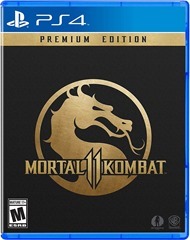 Mortal Kombat 11 promises to be one of the tabloids as it brings new characters to the fray. It also equips some of the signature characters with more brutal combos, with more intense fatalities and generally more entertaining experience.

So sit back, recline into your Ace Bayou X Rocker Chair as we take a look at all the add-ons you can look forward to in the recently released MK 11.

Cetrion gets the first acclaim as the “God of Nature”. As one of the more powerful female characters, she can summon boulders as well as manipulate the elements. With storms, wind, ice, and water at her beck and call, she proves to be a handful for just about any opponent in the game. Her fatality is a little anticlimactic though, as all she does is fire a beam of energy from her mouth. It is a little similar to Cindel’s scream of death, but it works all the same.

Here is another new character who also has the ability to manipulate his surroundings. Geras erects barriers, he can turn heaps of sand into giant hammers, and he can manipulate objects to suit his will. He is also, to some degree able to use the time to his advantage. He can rewind time like the infamous Thanos to restore lost health, or he can change the round timer at will. He is a pretty nifty addition to the game, but it is yet to be seen how he will perform when faced with more seasoned characters in the game.

The Kollector comes in third and holds the honor of being a Shao Kahn Enforcer. Anyone who’s ever played M.K will tell you that Shao Kahn is the ultimate opponent, few ever get past this massive skeleton masked demon. Kollector, on the other hand, pales in comparison and is only concerned with one thing-his health. Like Goro, the Kollector has four arms, can teleport, and commonly uses signature energy attacks to stun his enemies, and while stunned, he follows up with a myriad of combos to finish them off.

His fatality is pretty savage, he jumps on top of you, pummels you, and then rips your head off in typical MK overkill fashion. He may be powerful, but he is a little slow, and he can be a problem if you are dealing with fast counters.

Kronika doesn’t feature much in hand to hand combat, and she only shows up like a boss character whose main cameo is in the story version. She also has Geras as a minion and can manipulate time as well.

The element of time manipulation plays a huge role in the development of the story mode as present/past collide, making characters run into versions of themselves from alternate realities. Kronika acts as the key indicator here, as she rewinds time to undo the defeat of Shinnok who was decapitated by Raiden. Sonya Blade is also one of the returning faces, as she teams up with Ronda Rousey in some of the intense plot points of the game. NetherRealm has played the twists on the plot pretty close to the chest in order not to give anything away, so you’ll just have to play the game to get the full experience.

There isn’t much in terms of additions to gameplay, although there is a specific focus on players’ special abilities. The is more emphasis on individual moves as opposed to the more common combo attacks that have been the main feature in previous games. Differentiation of the X-Ray attacks has been introduced as the ‘FATAL BLOW.

The great thing about these attacks is they are last ditch. They only work when you are low on health and can shift the course of the fight, moving you from a losing position to having an upper hand.

Although MK11 does count as a new experience, and a chance to try out some new characters, you will still get the chance to tee up with some all-time favorite MK characters like Liu Kang, Kabal, Kano, Raiden, Scorpion, Sub Zero, Jade, Cassie Cage, and of course Shao Khan!

← Dell or HP? The Best Laptops in the Market
Gaming Experience at Ladbrokes Live Casino →