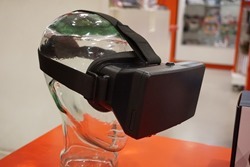 Online casinos have taken the gaming world by storm. As more and more players are entering the online gaming space the competition to attract customer eyeballs is increasing. Whether it be online slots or Blackjack casino games are on the lookout for new techniques to keep their customers engaged and entertained. On huge aspect where online casinos fall short of land-based casinos is in terms of the ambience it can provide to customers. This situation could take a complete U-turn with the onset of Virtual reality technology entering the online casino space. players could be treated to visual experiences that they have never felt before. Imagine an internet slots player fighting with aliens in space while playing for progressive slots as well. The impact that VR technology can make has no leaps and bounds

Will VR technology change the way Online Slots are played?

One of the big questions that the online casino industry is trying to figure out now is how well will their customers adapt to VR technology? Will VR technology be able to create an impact on the customers as predicted? Technology can be bizarre at times and we have seen many major technological advances that were predicted to be game changers fizzling out without a trace. However, gauging from the initial signals from the gaming community VR technology is indeed creating positive ripples. If this trend continues you could very well, see players getting transported into a new world altogether in front of their gaming screens and reputed online portals like Spinzwin casino offering VR enabled games to their players.

What are the major roadblocks in adopting VR technology?

There are two very important aspects that are the major barriers stopping VR technology from reaching the masses. The first challenge is that to make proper use of the VR technology. Online players for playing their favorite online slots will have to buy expensive gadgets. The second challenge is that VR is still a new concept and there are not enough places where players can have access to VR enabled games. These two aspects are interlinked, why would online players go and buy expensive VR gadgets unless the player has enough options to play? Same way, why would gaming companies spend tons of money on creating VR games unless there are enough players with the required gadgets out there?

Unless there is a consolidated effort from gaming companies to create great games using VR technology in popular segments like online slots there will not be enough takers for this. Online casinos like Spinzwin offers some great games when it comes to online games will have to soon adapt to the VR technology to keep its players engaged. Another advantage that could boost VR technology in the online gaming world is that as demand increases the cost of VR gadgets could also come down. There are many new companies who are now entering this space with an eye on the future.