Microsoft and its partners have just released the version of the venerable Windows mobile device, this time around dubbed Windows Phone 7. While Microsoft has been in the mobile device business for almost a decade, this version represents a completely new reboot of the line, with a complete overhaul of everything Windows Mobile. 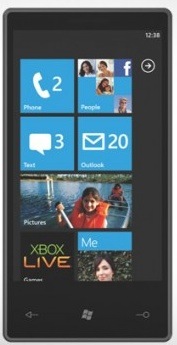 In fact, the new version is so new that it has completely forsaken any backwards compatibility and introduces a bold new interface designed to be finger friendly. The interface on previous versions of Windows Mobile borrowed too much from the desktop, and it pretty much required a stylus for effective use. The new interface is designed for simplicity, and in my opinion it hits the mark for ease of use.

However, when you look at Windows Phone 7, it is almost a case of too little, too late. While many will argue that it compares well with the first generation iPhone, it is not competing with other smart phones from that time period. This is a fact that the Android mobile operating system makers knew well, and it hit the ground running to pick up a large market share quickly.

So how could Microsoft, with its vast resources and a decade into the mobile game, do anything less? And yet, less is exactly what we have from the desktop operating company. But in this age of updates and versions, Microsoft could still turn things around with their latest phone OS, if they want to stay competitive in the market. We thought it would be good to outline a few things that should be addressed as soon as possible to help round out Windows Phone 7 as a mobile device… to at least be taken serious. Let’s take a look.

Open Up The Device To The Developers

First things first –  it is readily apparent that Microsoft is not going to be producing the quality kind of software to make the phone a really empowering tool for the user. In fact, their “Office” for the device is one of the most lackluster attempts I have seen to date. I am sure that in no time third parties will step in to fill the void.

So go one step further and let these third parties have access to the entire device. As it is now, the developers have no access to something as crucial as sockets. Without network capabilities, you can kiss video chats, VOIP, real time multiplayer games, and much more goodbye, before the product even hits the ground.

While you’re it, provide APIs for video and the compass. You know that augmented reality is becoming a hot topic in mobile devices, yet without these two, the developer will find it all but impossible to build such apps.

Again I am mystified. How can the company that wrote the exchange server produce a device operating system that can’t use its full policies? Most people think of “Microsoft” as “The” business company, and for good reason – their desktop office suite powers more companies than any other out there, and their exchange services keep businesses in communication. Yet they release a phone that offers no encryption, making it unacceptable for business use. This needs to be addressed pronto.

Windows Phone 7 has a great interface, and it has been highly touted (by Microsoft) as being designed to get you in, to your information, and out quickly. But if you need to search for either a document or an email, you are left playing a game of tile shuffleboard. Instead, incorporate a universal search that will allow the entire device to be searched from a quick and single access point. The iPhone has had this for literally years now, and so do most desktop operating systems. It fits the paradigm of the Windows Phone 7 interface so well it seems like it should already be in place, but it’s not.

Everybody knows this one by now, but I have to mention it. Windows Phone 7 NEEDS multitasking. Try to explain to any user of Pandora that they can’t listen to their music and browse the web at the same time and you will have one less customer. The same goes for something as simple as downloading a document – if you have to wait until the document downloads before you can do anything else, you are no longer just in and out.

Plenty has been said about the need for multitasking on Windows Phone 7, and I don’t need to go into a lot of details. Just fix it – Apple did.

Microsoft, what were you thinking? No copy and paste, no multi-word selection, no real editing capabilities besides the backspace key. Didn’t you consider that people might need to edit an email? Exactly how fast did you expect the whole “In and Out” process to take? This too has been much discussed as a shortcoming of Windows Phone 7. Fix it if you even dream about staying in the market.

There are many places that I could nitpick Windows Phone 7 and tell you what I think it needs. For example, a real navigation solution that offered a turn-by-turn solution would be wonderful, as would a browser that supported HTML 5. But beyond that, there is one thing that is missing from Windows Phone 7, and it is a major one – there is no clear roadmap of what Microsoft plans on doing with the future of the platform. At this point, it seems that Microsoft is stepping back and seeing if it will garner enough of a market to warrant further development.

Instead, Microsoft should be laying down a somewhat defined roadmap of the changes it intends to make, and even a rough time frame of when to expect it. This would bolster consumer confidence, and may increase sales from the disappointing 40,00 units on launch day. One thing seems fairly certain to me – without a plan from Microsoft showing that they are committed to fixing the problems and taking Windows Phone 7 into the future as a solid smart device choice, then the writing is on the wall.

When it is all said and done, I think that Windows Phone 7 is distinctly different enough on the mobile market to garner a lot of attention, and it brings a lot to the mobile platform. Unfortunately, the last time I said that about a Microsoft mobile product it was called “Kin”, and we know how that turned out. Is it a case of lessons learned or repeating the same mistakes? If Microsoft commits quickly to fixing what Windows Phone 7 lacks, it could be a great mobile choice next year. And if they don’t – well, do you see any Kin phones on the market now?