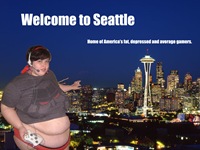 Researchers’ diving into the correlations between video games and negative human conditions is nothing new. For over a decade, we’ve been reading about the mental effects that violence and subjective opinions of inappropriateness found in game content have on the average human’s mind. Columbine happened because of Doom. City crime happens because of Grand Theft Auto. The General Aggression Model says Halo is the reason your kid doesn’t understand geometry and wears size 46 jeans. Researchers are always conducting hackneyed studies about video game users, always using mediocre testing methods and coming up with the conclusion they were hoping to find. Video games have been a scapegoat for obesity problems, child development issues, social introversion and the fact children don’t run down the street beating a hoop with a stick anymore.

A recent study by the Center for Disease Control, published by the no less than the American Journal of Preventive Medicine, is perhaps the most poorly-examined case study released about video gamers in recent years. The report classifies the average video gamer as 35, fat and depressed. It came to this conclusion by looking at the behavior of a small group of people from one city. Already, the whole thing is bunk, and only goes on to prove that stereotyping social groups through empirical research is still a hip thing to do.

Let’s first take a look at the “facts.” The study took part in the Seattle-Tacoma area, which apparently is a sufficient representation of the entire planet due to Seattle’s size, diversity, and having the highest internet usage in the country. The researchers apparently are aware that this is an inappropriate measurement of the “average” gamer, as the study states "The fact that the sample was drawn from a population concentrated in western Washington State and from an Internet-based panel may limit generalizability of the results.” However, that didn’t stop anyone from publishing the results as the conditions of the “average’ gamer. Microsoft Word also seems to think generalizability isn’t a word, and for the sake of being bitter, I’m going to agree with it.

249 gamers were selected from a group of 552 adults, all between the ages of 19 and 90. 56 percent of these folks were males. This small group of 249 people were the focus of this study – a study that obviously couldn’t reveal the average gamer as being any younger than 35, because teenagers weren’t included in the research. While the average age has increased over the past decade as games have evolved and drawn in a much broader market, the numbers can’t be accurate when a huge portion of the gaming community isn’t involved in a study to establish stats about the average gamer.

The conclusions were that men who game are fatter and use the internet more than men who don’t. Women gamers are more depressed than women who aren’t gamers. "Video game players also reported lower extroversion, consistent with research on adolescents that linked video game playing to a sedentary lifestyle and overweight status, and to mental-health concerns." My goodness, what a bunch of nasty folks we are.

Finally, the study concluded that for depressed gamers, playing video games is a type of "digital self-medication," with women more likely to play video games as a distraction from the horrors of real life.

I’m fairly certain that the average anything in America is 35 and fat. It’s a general median age, and Americans have the highest obesity rate in the world. Perhaps the average basketball player wouldn’t fit the bill, but I bet the average accountant, average TV watcher, average grocery store clerk, or average stamp collector would come back as fat, too. Especially if you only take a look at one group of people who are previously known to fit the bill…

I recall reading a study posted a few years ago by CNN (http://www.cnn.com/2004/US/West/01/10/life.stress.reut/) that credited Tacoma as the most stressful city in America, when examining unemployment, suicide, theft and weather. Perhaps that’s why their gamers are so depressed and stay indoors. Sure, the data is a few years old, but not that much has changed for the town. Suicide is still high, the weather still sucks, and the Seahawks are still terrible.

Anyone who doesn’t balance his or her life properly will become fat, except those fortunate few with hyperdrive metabolisms. Anyone who stays inside playing lots of video games, or anyone who stays inactive in general, will be fat. The results of this study don’t quite showcase a development in social examination, but are a big “duh” with a side of “yeah, so?” being dished out by Captain Obvious. Playing video games doesn’t lead to being overweight, inactivity does. I’d also bet that if the huge group of gamers aged 10-19 were included in the study, it wouldn’t have found the overall group to be as fat or depressed. What 35 year-old doesn’t have a few extra pounds? But again, this study wasn’t about valid research as much as typecasting and suiting an agenda.

On one level, this is just like the violence argument. The whole dispute is chicken and egg, but not really. We know which came first, but people need a faceless third party to blame for everything. Columbine didn’t happen because Dylan and Eric played Doom. Those kids were just plain insane, and were therefore drawn to Doom instead of Pokemon Snap. Overweight people are often depressed, which leads them to stay inside, be sedentary, and engage in sedentary activities. The cause of their obesity could be anything. People seek out the things that comfort their imperfections. How many overweight, sedentary, depressed people choose to read books or knit sweaters as opposed to playing video games as their means of escapism?

And imagine – people who are gamers spend lots of time on the internet. There’s a shocking revelation. People who are interested in a form of indoor technology are also interested in another form of indoor technology. Video games have become a social platform. Nearly every game can be played online; some of them even require such play. People are bound to make friends doing so. The ones that don’t are the ones that should be researched for social problems.

The study was based on self-assessment, a subjective means of collecting information. People answered questions about their habits and health. Someone saying they sometimes feel depressed isn’t the same as someone with a hardcore clinical depression problem. Everyone feels depressed at times, but that doesn’t mean they are depressed. Self-assessed claims are valueless. The study also fails to note how much gaming these gamers actually do, time-wise. The lack of this rather imperative information makes the real impact of gaming on the subjects even harder to gauge.

What we have learned:

Thanks to this study, we know those things to be true. Keep up the good work, CDC. Soon you’ll get that grant money you’re after to “examine” these findings further. I’d suggest administering self-assessments to fourteen kite fliers in Biloxi, Mississippi about whether or not they wear socks to bed, and publish the generalizability of the activity’s effects on their ability to see ghosts.

7 comments for “You’re All a Bunch of Fat, Depressed Gamer Bums”