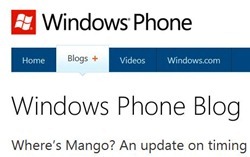 So according to the latest posting on the Windows Phone blog Mango will officially release in a week or two.  Don’t get too excited though as that doesn’t mean you’ll get it then. I’m on AT&T with my WP7 phone and knowing them it will probably be six month to a year before I see and update. They’ve done it over and over again with firmware updates for our phones, we never get them in a timely manner, AT&T customers are usually the last to get any kind of updates. That’s probably because they want to stuff it with more crapware for us to not be able to delete.

Head on over to the official Windows Phone blog for the full story: http://windowsteamblog.com/windows_phone/b/windowsphone/archive/2011/09/21/where-s-mango-an-update-on-timing.aspx