Now this is cool, I want one. This new controller from Evil Controllers is GOW3 themed, but that’s not why I want it. The X,Y,A and B buttons have been replaced the backs of bullets and there D-Pad has been replaced with buttons and they’ve added red LEDs. You can get the controller for $79.99 or for those DIY types out there you can get a kit to do the same to your own controller for $39.99. 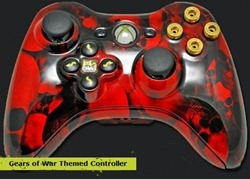 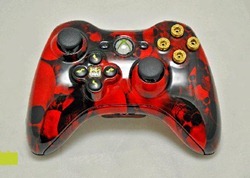 Gamers are on the fringe of one of the biggest years of game releases. Activision is releasing Modern Warfare 3, EA is revealing their flagship title Battlefield 3, and Microsoft has announced a remake of the original Halo. Evil Controllers plans to jump into the hype and excitement by improving upon their own product line up of high quality, fully custom controllers.

The addition this fall will be with controllers themed specifically for particular titles. Evil Controllers believes that with these upgraded Microsoft Xbox 360 Controllers, their fans will become fully immersed into their favorite universe.

Evil Controllers has starting selling their controller for Gears of War 3 in anticipation for the game’s release. The controller is currently on sale for a limited time at its introductory price of $79.99. A Do It Yourself Kit is also available for only $39.99 that includes the Gears of War inspired controller shell, bullet buttons, and a torque tool for modifying your own Xbox 360 controller.

Check Evil Controllers’ website in the next few weeks to learn about Evil’s exclusive Gears of War 3 gameplay enhancements at http://www.evilcontrollers.com.