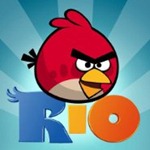 Yes the Amazon Appstore is now open, but it’s not without it’s issues sadly. If you’re on AT&T you can’t access it unless you have side loading enabled, which I of course do, supposedly AT&T is working on allowing access to it though. With AT&Ts track record of untimely updates though I wouldn’t expect it anytime soon.  The other big issue is that right now it’s United States only, so there are many, many people who are not happy right now.  Sadly those same unhappy people are leaving 1 star comments on games like the new Angry Birds Rio that you can get for free today on the Appstore bringing the overall scores for those games down just because they can’t install it. I’ve played though the first eight or so levels and Rio is pretty cool I have to say.

Every day on the Amazon Appstore you’ll be able to get an app that is normally a paid one for free, this makes the Appstore that much more enticing to people I think, I know I’ll be checking it everyday that’s for sure.

You can install the Appstore app to your phone or just go to Amazon and purchase it to have it ready for download to your phone.

I’ve been browsing the Appstore for a bit now and there’s a lot there but I was expecting much more, as in things that aren’t already available on the Android Marketplace. Most of it is the same really. I was hoping to be able to get games from Gameloft like N.O.V.A. and the others that we on AT&T just cannot get. Right now I see two games from Gameloft, Asphalt HD and UNO, so maybe there’s hope yet to see more of them there.