In all my years of reviewing I’ve never had the chance to review ASRock product, but I’ve heard very good things about them. They’ve just announced their new Sandy Bridge based board and they look decent.

ASRock, Inc. the global motherboard manufacturer launched their latest P67 / H67 series Sandy Bridge LGA 1155 motherboards early in this month. Intel Sandy Bridge features in its first architecture that both the GPU and the CPU can be located on the same silicone die, sharing on-chip cache memory, and hence lowers power consumption but enhance performance at the same time. 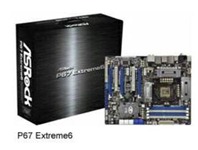 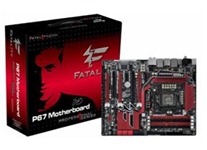 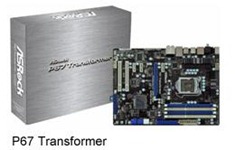 Commenting on the new release, James Lee, V.P of ASRock Sales and Marketing, is with confidence. “If there’s one component you don’t want to fail in your PC, it’s the one that holds all the others together: the motherboard,” he states. With the importance of motherboards in mind, and “paired with the most powerful processor architecture”, ASRock believes that their latest motherboard can “explore next-generation computing performance” with advanced technology. Mainly targeting at the DIY computer market, the P67/H67 platform also strives to meet various needs from entry level to advanced users.

Innovative Design to Achieve Advanced Performance
ASRock P67 / H67 LGA 1155 Motherboards provides an overall performance. Not only focusing on the practical function, ASRock engineers also develop stylish looks of the boards. The metallic and minimalism look of the package brings the atmosphere of technology; on the other hand, the delicate motherboard with fine arrangement and graceful color also suggests its quality is beyond the common standard. The new architecture features an upgraded Turbo Boost 2.0, which pushes core speeds over the system’s nominal TDP (thermal design power), also promises fewer cache misses.

UEFI – Revolutionary BIOS Architecture
The new boards adapt Unified Extensible Firmware Interface (UEFI) utility, an innovative BIOS utility which provides user-friendly options in a meliorated viewing interface. Compared with traditional ones, the latest UEFI utility offers many functions – Graphical Visual Experience, Mouse Enabling, and supports 3TB bootable HDD. Users no longer have to manipulate their work on a platform which is not so visual-friendly. UEFI provides a more comfortable graphical visual experience instead of just facing a black and white layout. Mouse enabling suggests more convenience and flexibility compared to keyboard enabling only. Last but not the least, 3 TB bootable HDD offers more capacity and possibility for high level users who would like to obtain better computing process.

AXTU – The All-in-one Tuning Software
ASRock Extreme Tuning Utility (AXTU) is all-in-one software to fine-tune different features in a user-friendly interface, which includes Hardware Monitor, Fan Control, Overclocking, OC DNA and IES. In Hardware Monitor, it shows the major readings of your system. In Fan Control, it shows the fan speed and temperature for you to adjust. In Overclocking, users are allowed to adjust the CPU frequency, ratio and some voltages for optimal system performance. In OC DNA, users can save their OC settings as a profile and share with your friends. Friends of users then can load the OC profile to their own system to get the same OC settings. In IES (Intelligent Energy Saver), the voltage regulator can reduce the number of CPU power phases to improve efficiency.

P67 Transformer – World’s 1st P67 Motherboard supporting Lynnfield LGA 1156 CPU
From many aspects, ASRock considers the problems in the past, and develops practical solutions according to the need of users. Since most of the P67 chipset-based motherboards are only paired with the latest LGA 1155 socket CPU, ASRock provides another practical option for users. The ASRock P67 Transformer model name obviously unveils its capacities. It transforms the P67 chipset motherboard into one which supports Lynnfield LGA 1156 CPU. To compare with P55 chipset PCI-E 1.0 spec, the P67 chipset can support PCI-E 2.0, and it can really provide the sufficient bandwidth for USB 3.0 and SATA 6 GB/s.

H67M-GE/HT – Best Motherboard for Home Theater
ASRock H67M-GE/HT motherboard supports high quality computing process it can also provide users a chance of experiencing an extraordinary media center. The Intel Sandy Bridge processor allows this board to support Intel HD Graphics 2000/3000 and new Visual Features, such as DX10.1, PS4.1 and Blu-ray Stereoscopic 3D with HDMI 1.4a. Users have more options, such as onboard HDMI, DVI-D, D-Sub and DisplayPort, to select as their display outputs. Among the abundant package, there’s a free set of MCE (Media Center Edition) Remote Controller and its Multi-Angle Receiver, which suggests more flexible and convenient of home entertainment experience. Moreover, to support the newly launched home 3D technology, ASRock H67M-GE/HT motherboard offers a set of 3D Red/Cyan anaglyph glasses in the package. As a result, users can enjoy the lively 3D vision in a simple way.

Professional Gamer-oriented Motherboard – Fatal1ty P67 Professional
Fatal1ty P67 Professional is one of ASRock’s featured Sandy Bridge Motherboards. Cooperated with Jonathan Fatal1ty Wendell, the legendary 12x World Champion Gamer, ASRock targets at the gaming segment, develops an advanced gamer-oriented motherboard. The red and black colored board suggests its function is impressed as well as its stylish look. From many aspects, the board fits the requirements of gamers, helping them with gameplay support from many aspects. One of the unique features, for instance, is Fatal1ty Mouse Port, a customizable technology for F-Stream PC gamers; with a wide range from 125 Hz to 1000 Hz to make adjustment, gamers can obtain more precise control of their mouse. As for the software part, the board, like other P67/H67 platforms, is also equipped with F-Stream Tuning Program, UEFI, and Fatal1ty XFast USB Technology.