Powerline stuff has always interested me, it’s about time we get serious with it though, everyone has powerlines in their homes, so why not utilize them? 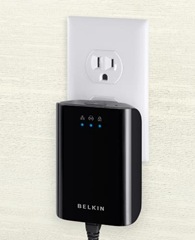 Setup of a powerline network is simple with its plug-and-play connectivity:

*NOTE: The standard transmission rate—1000Mbps—is the ideal physical data rate. Actual data throughput and distance will be lower, depending on interference, network traffic, building materials, and other conditions.

Belkin offers a diverse product mix that provides people with seamless electronics integration in their homes, cars, and on the go. Founded in California in 1983, Belkin is a privately held company and the recognized leader in connectivity solutions, in addition to accessories for MP3 devices, computers, and more. We provide extensive solutions for networking, home theater—with our PureAV® line of cables, power, and digital wireless accessories—and many more categories. You can view and purchase them at www.belkin.com, as well as through a network of major distributors, resellers, and superstores.