AOC has a deal for you on Black Friday, they’re offering their 27-inch LED LCD monitor for $120 off the original price which makes it $179.99 as it was originally $299.99. That sounds like a great deal to me for a 27 inch monitor and it has some decent specs as well. I wouldn’t mind getting one especially since I recently had one of my 23 inch monitors die on me, would make a nice replacement and upgrade! 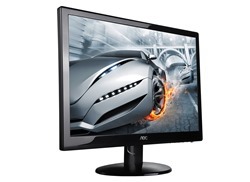 The 27-inch performance monitor, ideal for multimedia applications, displays 16.7 million colors and offers a 2ms response time that provides crisp, clear images even in fast action sequences while gaming or watching movies. Adding to its superior display performance, the e2752she offers a 20,000,000:1 contrast ratio that reveals more depth and detail in darker scenes.

The e2752she comes with one VGA and two HDMI ports for added multimedia connectivity. The easily accessible connections are rear-facing for direct insertion, a placement that is much more convenient than the more common downward-pointing ports. The display also has a 35mm audio port to allow users to easily connect earphones or speakers directly to the monitor.

The widescreen monitor includes AOC’s Screen+ software that can split the display into four self-contained work areas for improved productivity. The on-screen menu system allows users to change the monitor’s settings using only the keyboard and mouse, so that it is not necessary to reach up to the screen to adjust contrast, brightness and other preset modes.

Along with delivering strong performance, image quality and bonus features, the ENERGY STAR complaint e2752she also reduces energy costs and environmental impact. The display’s LED backlight is completely free of toxic Mercury, and the monitor also includes an eSaver feature that lets the user preset power conservation modes for the display when the PC is not in use.

Designed with a glossy black bezel and base, the versatile monitor is VESA 100 mm wall mount compliant so it can be used on a desktop or conveniently mounted on the wall to save space.

The limited time promotion on the e2752she is available Nov. 28 to Dec. 2 at Office Depot, OfficeMax, Best Buy, Newegg, Staples and Amazon, among other retailers.