Got Cablevision and an iPad? If you do I guess you’re lucky, at least about the iPad part anyway!

Customers Can Enjoy Cable Television Service Including Hundreds Of Channels, Video On Demand, Enhanced And Searchable Guide Information And DVR Controls On Their Tablet Device, Which Functions As A Television In The Home 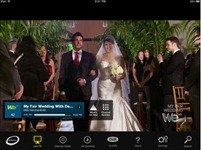 In addition to approximately 300 live channels and access to VOD, the Optimum App for iPad integrates enhanced guide information that makes it easier than ever before for customers to find the content they already receive as part of their cable television subscription.  Programming is fully searchable, including by genre, and the application includes the ability to schedule DVR recordings and manage previously-recorded content.

“This application allows the iPad to function as a television, delivering the full richness and diversity of our cable television service to a display device in the home,” said Tom Rutledge, Cablevision’s chief operating officer.  “It gives our customers the additional flexibility and convenience of watching television throughout the home, in places where set-top boxes might not be ideal or even practical, like the kitchen, bathroom or work room.  This is the future of Advanced Digital Cable televisions served with virtual set-top boxes, and just one of many digital displays we are going to be serving through a variety of applications,” Mr. Rutledge concluded.

Cablevision uses its secure and proprietary Advanced Digital Cable television network to deliver cable programming to customers for viewing on the Optimum App for iPad, and content is not delivered over the Internet.  The application turns the iPad into an additional television, enabling Cablevision customers to view the same live programming and VOD content already being delivered to other TVs in the home as part of the service they have paid for.  Cablevision has the right to distribute programming over its cable system to iPads configured in this way under its existing distribution agreements with programming providers.  Cablevision has been serving customers with switched digital cable for more than five years.  Advanced Digital Cable allows the company to switch in multiple digital formats, as its customers continue to buy the latest display devices.  Customers do not need to have Internet access to use the Optimum App for iPad.

Cablevision plans to deploy additional applications that deliver the same experience to other tablets and display devices, functioning as televisions.  The company plans to integrate remote control functionality into the Optimum App for iPad this summer.