We’ve taken a look at several Cirago products including their media centers. They’ve just announced a new one called the CMC3000 that features 1080P, BitTorrent, integrated card reader, UPnP, optional wireless and quite a bit of compatibility built-in for many audio, video and picture formats.  I was just informed by my PR contact that I do have one on the way for review, so look for that review in the coming weeks.

Featuring a 500 GB or 1 TB capacity hard drive, the CiragoTV Platinum CMC3000 includes built-in network-attached storage capability, which enables users to access and copy files to and from the device and/or computers and other devices over any local network. The CMC3000 is compatible with both PC and Mac computers. An optional wireless USB adapter provides wireless access for file transfer or streaming media files. The built-in Universal Plug-n-Play (UPnP) feature enables viewing of all UPnP-enabled devices on the local network directly on a TV through the device.

"The CMC3000 is designed to provide a comprehensive and affordable full-featured digital multimedia entertainment center that is ideal for home use," said Patrick Lo, President of Cirago International. "The system comes with everything you need to get it hooked up and running fast and easily to start enjoying your media on your TV."

A built-in BitTorrent client enables users to download peer-to-peer movie and music files directly onto the device quietly in the background, without having to leave the PC turned on. 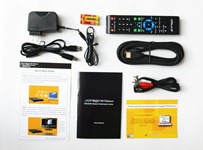 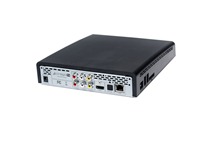 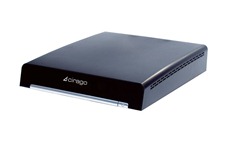 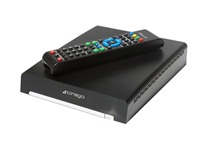 "This device allows users to finally enjoy their downloaded movies as they were intended: on the TV in high-definition 1080p, instead of in the confines of a laptop or PC monitor," Lo said. "Plus, with the free built-in internet radio feature, you can choose from thousands of internet radio stations and listen to your favorite music live through your home theater sound system."

In addition to handling the latest high-end media, the CiragoTV Platinum CMC3000 is also ideal for digitizing old VHS and Hi8 videos and home movies: just connect your tape player to the CiragoTV Platinum, hit play/record and quickly create a digital backup of analog tapes for free.

The CiragoTV Platinum CMC3000 can also be used in commercial applications for in-store retail advertising, looping slideshows, and even in educational settings for playing various media in the classroom. The device is also multi-lingual, with menus available in seven different languages.

The 1 TB CiragoTV Platinum lists for $249.99 MSRP and the 500 GB model lists for $229.99 MSRP. They are available at major electronics retailers including NewEgg.com, MicroCenter, Amazon.com, Fry’s Electronics and TigerDirect.com.