Never played the games, actually never heard of them… 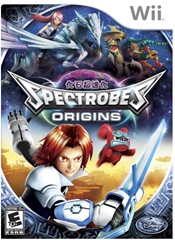 Disney Press will publish the new middle-grade series based on Disney Interactive Studios’ best-selling Spectrobes videogames. The sci-fi story of two planetary officers and the mysterious Spectrobes creatures will be told through these original junior novels in addition to the upcoming Wii™ game. Disney Interactive Studios and Disney Press today announced that four Spectrobes junior novels will be available in North America this year.

Spectrobes is Disney Interactive Studios’ original monster battle video game franchise. The first Wii game of the series, Spectrobes: Origins, will be released this fall. More than 1.6 million units of the two Spectrobes Nintendo DS games released in each of the last two years have been shipped worldwide.

“The Spectrobes video game franchise has been incredibly successful with the handheld releases the past two years and the anticipation of the first Wii game, Spectrobes: Origins, this fall,” said Craig Relyea, senior vice president of global marketing, Disney Interactive Studios. “As an original video game property, Spectrobes is expanding to excite audiences in new ways. The four junior novels are the perfect initial step in growing the Spectrobes franchise.”

“We are excited to expand upon the incredible world created in the Spectrobes games with original storylines and new novels,” said Rich Thomas, executive editor, Disney Press.

More information about the books:

On a routine mission, Rallen and Jeena, two officers from the Nanairo Planetary Patrol, respond to a bizarre distress signal. When they arrive, they discover the wreckage of an escape capsule. Inside, an old man has been suspended in a cryogenic sleep for quite some time. Upon awakening, he reveals that an evil force known as the Krawl threatens to destroy everything in the universe. The only force that can stop the evil Krawl is a prehistoric group of creatures that have been scattered throughout surrounding worlds—the Spectrobes. But before the Spectrobes can battle, they must first be discovered and activated. Will Rallen and Jeena be able to find the Spectrobes and destroy the menacing Krawl . . . or will the Krawl find the young officers first?

Spectrobes: Rise of the Ancient by Ned Lerr

Rallen and Jeena continue their quest across the galaxy to discover more buried Spectrobes and put an end to the evil force known as the Krawl. But the Spectrobes are not the only discovery occurring in the Nanairo Galaxy. An ancient set of ruins have been uncovered on Planet Nessa. When Rallen and Jeena team up with Professor Kate, a scientist from Kollin, the clues they find at the ruins are more than they could ever imagine. Could the ruins actually be an ancient machine somehow linked to the creatures of the light? As the heroes try to find answers, a dark being known only as Jado is trying to find them. Will Rallen, Jeena, and Professor Kate be able to find the answers to this new discovery? Or will Jado and the Krawl reign supreme?

Coinciding with the video game release of the same name, the Spectrobes: Origins novel expands on the story from the Wii game. When Rallen and Jeena respond to an anomaly in the Nanairo System, they are sucked into a portal and sent to a new dimension! When they arrive on an unknown planet, there are met with a well-known enemy: the Krawl. When they learn that a massive army of Krawl will be unleashed in this galaxy, Rallen and Jeena must find five mysterious shards that when combined, will release a powerful energy that will finally end the evil force known as the Krawl. But the High Krawl known as Jado will stop at nothing to put an end to Rallen and Jeena for good. And just when the officers thought they had enough on their hands, Commander Grant’s strange behavior begins to unfold as the officer’s learn of his past and his connection to this new galaxy and a mysterious being known as Krux.

With the High Krawl, Jado, no longer a threat to Rallen and Jeena, the Nanairo Planetary Patrol officers must now head back to their home planet of Kollin, in hopes of stopping a full fledged Krawl attack constructed by the evil menace known as Krux. With the final pieces of the shard gathered together, they can now summon and unleash the Ultimate Form. But Krux will do everything in his power to prevent that from happening.

The paperback books each have a suggested retail price of $4.99. Available wherever books are sold.

This fall the fight to defeat the evil Krawl horde continues, but this time only a series of lost fragments can stop the growing menace. The game lets players control either Rallen or Jeena in the first Wii installment for Disney’s top-selling Spectrobes franchise. Players will find, train, and command more than 100 mysterious creatures. With the Spectrobes at their side, they will use the creatures’ special powers and abilities to stop the Krawl and save the galaxy.

Developed by Genki Co., Ltd., and published by Disney Interactive Studios, Spectrobes: Origins will be available only for Wii August 18.