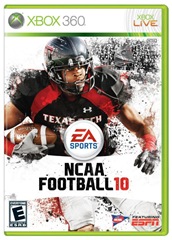 NCAA Football 10 brings the excitement of college football to fans across the nation like never before with the all-new Season Showdown. In this new mode, every game counts as fans declare their loyalty to a favorite school and give the ultimate show of support in a nationwide competition for pride. After choosing a school to represent, players can earn credits for their school by playing NCAA Football 10 and through new web-based games at http://seasonshowdown.easports.com. Millions of college football fans around the country will be on a mission to prove their school is number one with NCAA Football 10’s Season Showdown.

TeamBuilder is an all-new, online create-a-school feature that revolutionizes the user’s ability to produce personalized content for NCAA Football 10, which was announced last month at E3. With the capability to upload logos and numerous customization options for uniforms, fields, rosters, and much more, TeamBuilder gives users the opportunity to design completely original teams with infinite possibilities. A football fan’s dream, TeamBuilder enables users to experience the excitement and pageantry of college football, defined by their own personalized creations. Since its launch, fans have logged onto http://teambuilder.easports.com and created teams at an astonishing rate, averaging seven per minute during the first two days. More than 160,000 teams have been created, ensuring there is an unprecedented amount of content for fans to use in-game beginning today.

Television sports reporter Erin Andrews is featured as the host of Road to Glory, a new mode in NCAA Football 10 for Xbox 360® video game and entertainment system and PLAYSTATION®3 computer entertainment system. Road to Glory is a broadcast-style video presentation in which Andrews and Kirk Herbstreit chronicle your career as a college student athlete. For the first time ever, players actual in-game highlights are featured in these broadcast-style presentations. Plus, an all-new, completely redesigned 3-D dorm room prominently displays triumphant moments through photos, trophies, NCAA Football news and more.

*Based on NPD data.

About The Collegiate Licensing Company

CLC is a division of global sports and entertainment company IMG. Founded in 1981, CLC is the oldest and largest collegiate licensing agency in the U.S. and currently represents nearly 200 colleges, universities, bowl games, athletic conferences, The Heisman Trophy and the NCAA. The mission of CLC is to be the guiding force in collegiate trademark licensing and one of the top sports licensing firms in the country. CLC is dedicated to being a center of excellence in providing licensing services of the highest quality to its member institutions, licensees, retailers and consumers. Headquartered in Atlanta (Ga.), CLC is a full-service licensing representative, which employs a staff of more than 80 licensing professionals who provide full-service capabilities in brand protection, brand management, and brand development. For more information on CLC, visit: www.clc.com or www.imgworld.com.