Futuremark has just released some information about their new game called Shatter Horizon, and it looks to be interesting…

“Making a game set around the Moon, the Apollo missions have been a great inspiration to us,” said Antti Summala, Lead Game Designer at Futuremark Games Studio. “However, Apollo 11 happened 40 years ago, before many gamers were even born. With Shattered Horizon we’re imagining what we might achieve in the next 40 years, events that could happen in our lifetime.”

Shattered Horizon is a multiplayer first-person shooter for PC. In the game world, a catastrophic explosion on the Moon fills near-Earth space with billions of tons of rocky debris. Survivors on the Moon are forced into conflict with those trapped on the battered International Space Station. Teams of players fight in zero gravity to control the limited supplies that mean the difference between survival and death.

The two new screenshots show one of the environments from the game, a huge fragment of rock slowly rotating in space against a backdrop dominated by the shattered Moon.

Shattered Horizon is currently in development and a release date has not been announced. However, PC gamers can register now for the 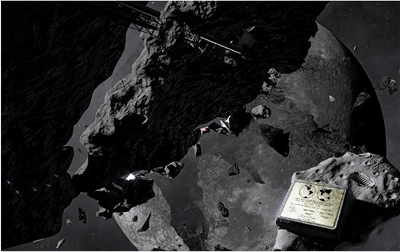 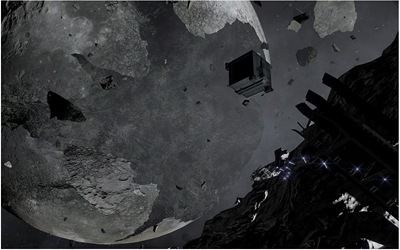 Futuremark® Games Studio, wholly owned by Futuremark® Corporation, was formed in January 2008 to create original games with new and entertaining gameplay. Shattered Horizon is the studio’s first game, announced at last year’s Leipzig Games Convention. It will carry the NVIDIA®: The Way It’s Meant To Be Played™ seal. The game has not yet been rated by ESRB, PEGI or other rating bodies. Futuremark is based in Helsinki, Finland and maintains a sales office in Saratoga, California. For more information, please visit http://www.futuremark.com