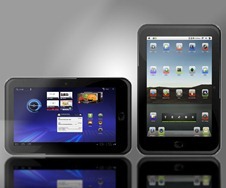 Idolian.com is pleased to announce IdolPad give away contest for Facebook fans. Idolian is a tablet PC manufacturer and distributor with its offices in Newport Beach, CA, Arkansas and South Korea. Idolian’s vision is to produce reliable Tablet PC, priced between $100-$299 that any individual or small business can afford.

Idolian.com is giving away a free IdolPad as part of their marketing efforts to launch their newest 7 inch Tablet PC. Idolian.com has hopped on social media bandwagon with Facebook as its starting point. Along with its best seller IdolPad priced at $99.99, Idolian offers many new tablet PCs on its website.

The first contest has launched February 5th, 2011 and is simple and easy to get in on. Facebook users are simply asked to become a Fan of their Facebook page http://www.facebook.com/idoliantab by pressing “LIKE”. One of the 500 fans who “LIKE” Idolian’s Facebook page will automatically be entered to win the new IdolPad. The contest is only open to fans 18 years or older. Idolian.com is planning on giving away up to 10 more Idolpad for every 100 additional fans after 500 fans contest is done. Facebook fans will get exclusive offers and updates for sales events, product upgrades and new product launch and more.

“We’re just happy to get our name out there. A lot of what you buy on the internet is heavily dependent on our customer’s reviews. Everyone I’ve met who has had a chance to use an IPad or Galaxy tab has always wanted their own tablet, we’re trying to making it affordable to own.” said Arthur Lopez, Director of Operations for Idolian.com.    “We’re all excited about this Facebook contest, I hope it would be the first of many. “

IdolPad is one of the best selling 7" Touch Screen Tablet PCs in the market. With the price tag of less than $100, IdolPad comes with 7" Multi-Touch Resistive Screen, Fast 1Ghz Cortex 9, 512 MB and 4GB Flash Drive. IdolPad is the best tablet PC that customers can buy to get true Tablet PC experiences at less than quarter of the price of the Apple IPad. Many consumers are impressed with its superior quality and its low price. IdolPad is best selling Tablet PC for Idoilan.com.

IdolPad will be available to upgrade to the newest Android 4.0 version by the end of May 2012 using the Firmware updates that will be provided on idolian.com. This upgrade can be performed on all IdolPad that was purchased.

IdolPad is currently available to purchase from idolian.com and all the major online retailers such as Amazon and Sears.com. Thanks to its established retail distributions, Idolian tablet PCs will be widely available at cellular locations throughout the USA and South Korea in the near future.

All of Idolian’s Tablet PCs come with a 1 year limited warranty that is serviced in the USA and offers extended warranties and protection plans for sale only on idolian.com.