Here’s another free app for you, this one is an augmented reality game called SkinVaders. It uses your camera and puts you in the game with this little invaders popping up on your face. You’ve got to pop or tap them to destroy them and their eggs. it’s a free game, can’t beat free right? 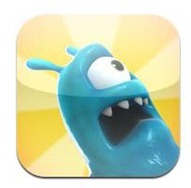 Total Immersion, the global leader in augmented reality, today released SkinVaders™, a fun game for all ages available as a free download for the iPhone®, iPad2® and iPod touch® at App Store(SM) at http://www.itunes/apps/skinvaders.

Created with Total Immersion’s D’Fusion® Studio Augmented Reality (AR) platform, SkinVaders is the first game to fully leverage AR literally bringing players into the game—by transforming their faces into game terrain over which alien invaders, known as SkinVaders, battle it out for total domination. To defeat the SkinVaders, players eradicate invading aliens by tapping on them and popping the eggs laid by the invaders.  With 9 levels and a variety of SkinVaders, all the action takes place on the face of the player.  Pictures are automatically snapped during the process incorporating the 3D graphics, making them fun to share with friends and family. The stakes are high:  It’s time for players to save face.

"SkinVaders demonstrates a world of possibility created by Total Immersion’s powerful augmented reality platform D’Fusion Studio," said Bruno Uzzan, CEO of Total Immersion. "Players are literally brought into the game as they fight the invasion of SkinVaders intent on taking over their face. The markerless tracking and rendering are so sophisticated that players can suspend belief, deeply engaging in the most personal, realistic and real-time augmented reality experience on the market today."

← AT&T Activates One Million iPhone 4S’
Turn Your Laptop into a Dual-Screen with CINQ, the Portable Laptop Monitor →