Hmm, this is interesting.  It’s an attachment for you iPhone 4 or 4S that allows you to take 360 degree videos that you can share with your friends and family on the GoPano network. It’s not only an attachment to the camera but it’s also a case for your iPhone.  Price is $79.99 and it’s available now on the GoPano site and several other places online. 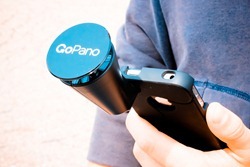 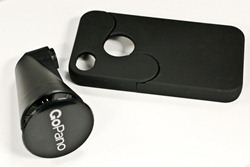 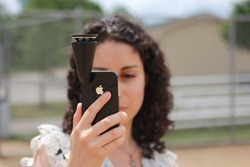 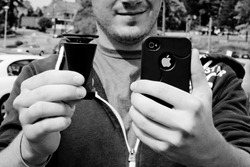 “Life happens in 360…Now your videos can too!” EyeSee360, the leader in one-shot 360 video and panoramic imaging, is pleased to announce the availability of GoPano micro, a unique iPhone attachment that lets everyday users create 360 panoramic videos, as well as introduce the GoPano App and http://www.gopano.com – the world’s first 360 video sharing network.

Putting a spin on traditional video, the GoPano micro offers iPhone users the ability to record everything around them simultaneously with the innovative 360 lens and software (patents pending). Designed to make 360 video easy for everyone, using the GoPano micro is a cinch; the two-piece case is simply snapped onto the iPhone along with the the 360 lens and from there, users can capture the 360 action all around them by just pressing record! Uploading videos is just as easy. To share video experiences, users can upload video on http://www.gopano.com or through the GoPano app to share with friends and family.

The GoPano micro’s custom designed iPhone case can also be used to protect users iPhone when they are not recording video.

GoPano micro offers novices and professionals alike the ability to capture the world in 360 video, right in the palm of their hand. The design of the device lets users preview live 360 video as it’s recorded. GoPano micro has the widest vertical field of view, much larger than any other comparable 360 lens (90° or +/- 45°)

Together with the GoPano micro optic, the free GoPano app lets users create immersive, 360 video directly from their iPhone. The 360 video can then be uploaded and shared with friends and family, creating an experience that’s unique to each viewer.

Users can also view the most popular videos—or friends’ videos—right from their iPhone or by visiting http://www.gopano.com, the only 360 video sharing network on the web. Users can share their creations on popular social media websites.

GoPano micro is now available for purchase through the GoPano website, B&H, Adorama and Amazon.com and will arrive at select retail outlets later this month.

The current GoPano micro is compatible with the iPhone 4 and the new iPhone 4S.

For more information or to buy, visit http://www.gopano.com.

← Reusable, Protective Sleeves for Your Gadgets and Devices from the Joy Factory
Free iOS App: UrbanWonderer →