Now I like this and if I had money this is one campaign that I would be happy to back as it’s something I can really get behind and I think that it could be very useful. The Venture camera is a bodycam and more as it can be used as a car DVR and live stream camera as well. With everything going on in the world today I think everyone should have cameras really, sure there’s a question of privacy but I would be willing to give a little of it up for the protection it would offer. I have a car DVR now but a little over a year ago I was physically assaulted by a police officer in front of my son, cop lied said I didn’t use my turn signal, but I did, and I was physically hurt during his body search of me on the side of the road I was in pain for days after, but then he let me go, no ticket no nothing, but it turns out the cop was a bully and known for doing these things to people but no one still has done anything about it, I wish I had something like the Venture at the time this happened. Anyway, more details below for you about the Venture…. 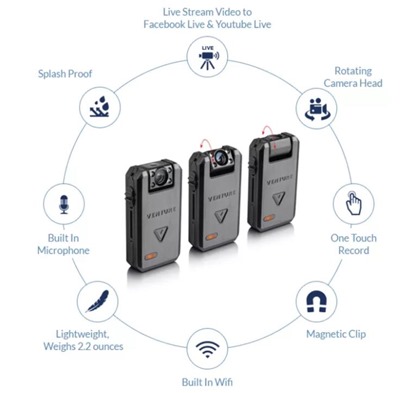 WOLFCOM®, a leading manufacturer of body worn cameras for law enforcement, announces that it has developed a body camera for civilians. Giving everyone the ability to record and document, not only those important moments in their lives, but critical events like peaceful rallies and marches that could at any time erupt into violence.

An Indiegogo campaign (https://igg.me/at/venturecamera), which has a funding goal of $25,000 USD, is now live and features limited Super Early Bird specials of $149 USD (60% off retail) and several other rewards for early backers.

After years of manufacturing body worn cameras tailored for law enforcement, the Los Angeles based company, is stepping up after listening to the call of thousands of ordinary Americans to build a civilian body camera. The VENTURE is modeled after its sister version, the WOLFCOM Vision body camera for law enforcement. The original Vision body camera was built with features that law enforcement officers and agents said they needed to assist them while on the job. Similarly, the VENTURE is catered to the everyday person and will feature four-in one functions – body camera, car camera, flashlight camera, and a live stream camera.

“The violence in Charlottesville, Virginia made us realize the need for this camera. People need a way to broadcast the truth to the world. This civilian version of our law enforcement camera is ideal for any profession, students, activists, trades people, drivers or the everyday adventurer,” said WOLFCOM’s Founder and President, Peter Austin Onruang.

“With Facebook and YouTube Live becoming very popular across all generations, we designed VENTURE to be the world’s first wearable live stream camera designed for everyone,” said Onruang. “It’s like having your very own broadcasting studio wherever you go. Just clip the camera where you want, then capture and stream from your point of view – it’s that easy.”

He added that with the increase in protests and marches, not only in the United States but globally, people who are peacefully protesting can use the VENTURE to document their side of the story. Video footage can either be stored internally or stored on the user’s Facebook or YouTube account.
The new camera is billed as “The Camera of the People, by the People, and for the People”. A website for it can be viewed at www.VentureBodyCam.com

← Deal: Save 15% on an EWin Racing Gaming Chair
be quiet! Launches White Edition of Dark Base Pro 900 Case →