Someday I’m going to get an Intel SSD to play with, but until then I can post the news about them right?! Seriously though the new Intel SD 3700 Series offers capacities from 100gb up to 800gb and of course the SATA6 interface for extra fast transfers. Price range from $245 for the smallest capacity all the way up to almost $2,000 for the 800gb version.   Full details below.. 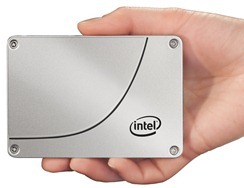 The Intel SSD DC S3700 Series is a 6 gigabit-per-second (Gbps) SATA drive with performance transfer rates of 500 megabyte per second (MB/s) reads and 460 MB/s writes. It delivers up to 2x read and 15x write performance over its previous generation Intel® SSD 710 Series. Samples of the product are now available for data center customers to begin quality and validation cycles. General production availability is expected to begin by the end of the year, with volume production in the first quarter of 2013.

For more information on Intel SSDs go to www.intel.com/go/ssd