So apparently this is being sold to Apple users only, which I can’t quite figure out how a USB drive is Apple exclusive? It’s just a USB drive right? Then again the Jetsetter is much more than a USB drive, it’s a real Swiss Army knife like MacGyver carries but this one has USB drive in it!  Price range from $40 to $100 depending on which capacity you want, and each capacity brings with it a different set of tools on the knife itself. 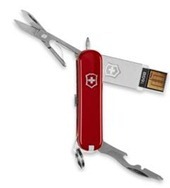 Just in time for the holiday shopping season, Victorinox Swiss Army today announced the release of its first USB designed specifically for Mac users. Fittingly named the Jetsetter, the USB features flight-friendly Swiss Army implements along with a detachable flash drive, and is pre-loaded with security software specific to Mac devices.

"The Jetsetter offers Mac users a survival tool for a modern device-driven world," said Rene Stutz, President of Victorinox Swiss Army North America. "The USB couples file security with the everyday functionality and beautiful design that users have come to expect from a Swiss Army product. Engineering the Jetsetter to be compatible with Apple devices and the Apple user’s lifestyle has been a fun and rewarding project that we are excited to see come to life."

Available in an 8 GB, 16 GB or 32 GB version, the Jetsetter’s secure software allows users to encrypt files, securely store personal username and password information and browse the Internet in Swiss Army style, without leaving traces of browsing history, files or cookies. More information on each storage capacity is as follows:

The Jetsetter, available now, is being sold exclusively through the Apple Online Store.