Yes, it was bound to happen, it’s the Zombiegram! No, sadly it’s not the kind that comes knocking at your door, but wouldn’t it be cool if it was? Seriously, there would be a knock at the door and it would be a singing zombie delivering you a message! That would be awesome, yes, yes it would! Oh, well, wishful thinking, this Zombiegram is an app for your iPhone that let’s you send zombie themed postcards. 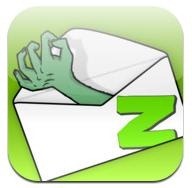 Mobile application development firm Purple Forge (http://www.purpleforge.com) is well known for its work in politics, events and municipal government applications – but today is announcing that it is branching out into the world of the undead with Zombiegram.

Zombiegram (http://ow.ly/6YvwJ) is the first iPhone application deployed by Purple Forge that allows users to create and share zombie-themed postcards with their friends using Facebook, Email and Twitter. The application is loaded with visually stunning graphic novel styled art including zombie families, zombie portraits and zombie attacks. The postcard creation features allow users to customize the watermarks and postage stamps of the postcards to give it their own custom ghoulish feel.

With Halloween around the corner and this week’s premier of the second season of the popular AMC series “The Walking Dead”, Zombiegram is the ideal way to engage friends on what is shaping up to be the year of the Zombie.

HBO’s “True Blood” season finale offered the insight that “zombies are the new vampires,” something Hollywood has been catering to with series such as “Resident Evil” and the upcoming Brad Pitt film, World War Z. Even the Center for Disease Control (CDC) in Atlanta has issued information on how to prepare for the coming Zombie Apocalypse.

The combination of mobility and social media with zombies on the number one smartphone device for applications makes Zombiegram a must have application for the zed-loving set.

← Cadence Introduces the 4:20 Watch
Wheels on the Bus Comes to Android →