We can file this one under, things I don’t need but really want. The LaMetric is what they’re calling a smart ticker and it’s a rectangular box basically with an LED screen on it that can display pretty much anything you want it to with graphics and lettering. It just launched on KickStarter and it’s already well past the half way point and it has 44 days to go yet. Check out the pictures and more info below and you’ll see what I mean about wanting one.. 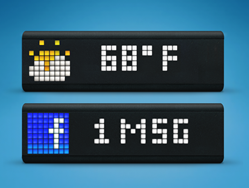 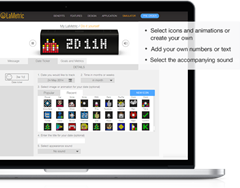 Tracking what’s important to you not only includes your personal life but also work life. With LaMetric, instead of having team members scramble to gather the latest business numbers, stock reflections and Facebook likes, LaMetric can easily display all this info, viewable to the entire team in the conference room due to its bright, sharp, square pixels. Set up LaMetric in the window of your retail shop to display Facebook likes and entice passers-by to come in and shop. 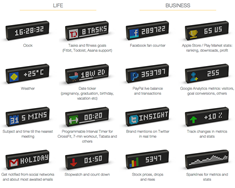 LaMetric will feature several pledge levels, for both plug-in and battery operated units. Perfect for outdoor workouts like CrossFit, use your battery-operated LaMetric to set seven minute timers for your favorite interval strength training exercises. The easy-to-view stop clock helps you know when it’s time to push it for those last few seconds.