Everybody loves free stuff right? So you’ve got two weeks left to win a sweet tiny NAS box from Thecus, what are you waiting for? Go enter today! 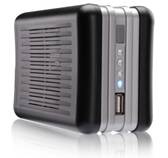 06/19/2009 – Earlier last month, Thecus® announced the Share It and Win Contest where anyone could win a brand-new N0204 miniNAS, the world’s smallest fully-featured NAS unit. Since then, hundreds of Thecus® fans have entered the content, trying to win their own pocketable NAS. With just under two weeks left in the contest, time is running out to qualify to win.

But from now until June 30th, hardware enthusiasts from around the world can still enter the Share it and Win Contest. For your chance to score your very own Thecus® N0204 miniNAS, all you need to do is help us spread the word about the world’s smallest NAS device!

Here’s how it works:

For more information on the event, check out:

For more information on the N0204, check out: