Here’s something interesting a 24 inch HD Display with built in HD video and voice. It’s a collaboration between LG and LifeSize, which is a subsidiary of Logitech. The display has a 1920×1080 resolution, while the built in camera can do 720p content, The price is a bit up there at $2999 though. It’s expected to be available 3rd quarter of 2010 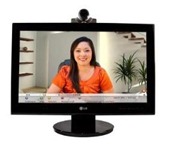 LG’s Executive Video Conferencing System, powered by LifeSize, is priced at USD $2,999 with global availability expected in the third quarter of 2010.