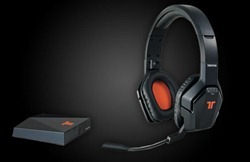 Darren Richardson, the President and Chief Executive Officer of Mad Catz Interactive, Inc. stated, “The Primer is the third of our co-branded headsets to be released for the Xbox 360 and the first wireless product in the range. We are excited to bring passionate gamers high quality, wireless gaming.”

Additional information is available at: http://www.trittonusa.com/primer