Apparently they think this iPhone wallet case looks like it may have been designed by NASA engineers?! It’s called the iLID and it’s thin at 17mm and small and can hold money, credit cards and even a key if you need it to. The case is thin and made of a polycarbonate material. 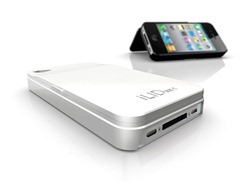 Engineers at NASA look as though they have been involved in the design of the iLID-mk1. With deep space styling, the world’s thinnest iPhone wallet is a must have for those who are looking for an iPhone wallet that eclipses it’s rivals with it’s cutting edge design.

Designed for a payload of two cards, key, cash and the ability to serve as a kickstand. The iLID-mk1 met with international interest after being featured in Macworld on the strength of rapid prototypes.

Bearing the MK-1 embossed on the front as a nod to the Apollo missions and aerospace pioneers such as Chuck Yeager.

The iLID-mk1 is rocketing up the list of must have items for the iPhone 4 & 4S.

Pre orders are now being offered at http://www.ilidiphonecase.com with early supporters also receiving a limited edition “world’s thinnest 1gb usb stick” as a thank you to helping with the launch of the product.