I’m not sure about these smartwatches and the whole trend, there just seems to be too many of them now I think. Yes competition is a good thing but how do you know which one to choose? My biggest issue is the support, I get one and a year later the company puts out a new watch and there’s no longer support for the original one. This is tech, six months or less things are obsolete. Anyway, if I was was to choose one of the available smartwatches out there right now I think it would have to be the Neptune Pine as it just seems to be able to do everything I would want or need it to do. This PR is about the fact that Neptune is now shipping their Pine smartwatches to their backers from KickStarter but you can pre-order one right now on their site… Details below.. 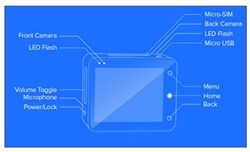 The second batch of Neptune Pine smartwatches will be delivered to Kickstarter backers by November 2014.

Non-Kickstarter backers can also pre-order the Pine for USD$349 for a 16GB version or USD$449 for a 32GB version at getneptune.com. Those orders are set to ship by Q4 2014.

If you want to get a big jackpot and earn various rewards visit Casinonic online casino!
–
Goldenslot
–
sa gaming
–
Shop now on EwinRacing
–
Your Ad Here $10 per Month
–