A few app announcements today it seems, this latest is called Onmaway meaning ‘On My Way’. it’s an app for those of you that like texting while driving. You don’t do that do you? You know it’s illegal in some places to do that right? People drive me nuts when I see them texting and driving and swerving all over the road while doing it. It’s dangerous and I don’t think what you have to text is that important really… This app Onmaway will automatically notify people of where you are and how long it’s going to take you to get there, so you don’t have to. I don’t like texting at all honestly, but I know it’s very popular and something like this should be standard on all phones I think… 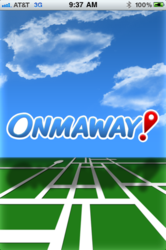 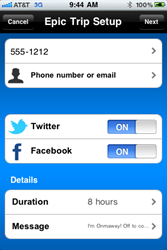 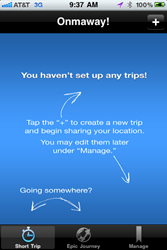 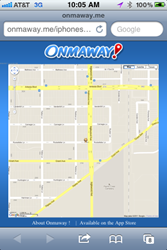 Onmaway is a simple way to automatically let other people know a user’s location over time, whether it be their spouse for 20 minutes or their social network for the length of a cross-country trip. The app allows users to send a link to friends and family via text, email, and social media that lets them to track the user’s location on any web browser.

The app was inspired after a friend of founder Jeff Ferguson received a traffic ticket for texting while driving. Onmaway is designed to help people avoid the dangerous practice of texting updates to friends and family while driving. “People don’t realize that the simple act of texting, ‘I’m on the way,’ can distract you long enough to cause a serious accident,” says Ferguson.

Recent studies show that over 25% of all accidents are caused by "distracted driving" and that number increases with teen drivers. Texting while driving is now banned in over 39 states and more states are passing legislation against this dangerous practice. With the help of Onmaway, users can simply let the app update their friends and family without ever having to touch their phones while behind the wheel.

“Apps that shut down texting by drivers completely are one solution,” continued Ferguson, “but people are still going to want to communicate with their friends and family.”

Tracking services from cell service providers can cost $20 or more a month, but Onmaway is only a one time charge of $1.99 – much cheaper than a ticket for texting while driving. Onmaway is available for the iPhone in the Apple iTunes App Store. Versions for Droid and Windows phones will be available soon.

“Technology created the hazard of texting while driving,” says Ferguson, “It is technology’s responsibility to solve the problem.”

To celebrate the launch of Onmaway, Ka Pow Interactive is giving away an Apple® iPad. Visit http://www.OnmawayApp.com for more information.