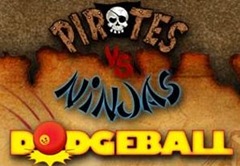 Settle the Ultimate Battle in the European Launch of ‘Pirates vs. Ninjas Dodgeball’™ for Wii™ from SouthPeak Interactive

LEICESTER, England–(BUSINESS WIRE)–SouthPeak Interactive Corporation (OTCBB: SOPK), is today releasing in Europe, its new arcade-style videogame, Pirates vs. Ninjas Dodgeball™, featuring iconic characters playing the ultimate playground sport of dodgeball. Using a ball to tag opponents out of the game, Pirates vs. Ninjas Dodgeball™ transforms the popular game of dodgeball into an action packed battle between the world’s greatest enemies: pirates and ninjas.

Who would win a fight between pirates and ninjas? It’s a tough question to answer and is a pop culture phenomenon that has generated YouTube videos, books, thousands of online postings and entire online communities in a rivalry that’s shown no sign of being settled…until now! Pirates vs. Ninjas Dodgeball™ for Wii™ was developed by Blazing Lizard to offer players the opportunity to settle this debate on the dodgeball court.

“The aim was to create a fun and exciting game for Wii that made the most of this rivalry in an energetic game that makes perfect use of Wii’s motion-sensing controls,” said Sarah Brockhurst, European Marketing Manager, SouthPeak Interactive. “Pirates vs. Ninjas Dodgeball is unlike any other game currently available on Wii and delivers a brilliant single player game that really comes alive when your friends and family join in.”

The game is played with seven different teams, including the pirate and ninja teams, as well as zombies, robots, aliens, monsters and Mushroom Men (from the Mushroom Men™ games, also published by SouthPeak). The battles take place across eight arenas where players look to settle the score once and for all.

Pirates vs. Ninjas Dodgeball™ is rated PEGI 12+ in Europe and is available today. For more information, visit www.SouthPeakGames.com.

For a comprehensive investor relations portal complete with fact sheets, presentations, interviews and video (when available), please navigate to: www.trilogy-capital.com/autoir/sopk_autoir.html

Formed in early 2007 and based in Austin, Texas, Blazing Lizard’s goal is to create high quality, compelling games for all platforms. Head to www.blazinglizard.com to find out more.