The sequel is out, well it’s sort of a sequel as it’s a totally new Plants vs Zombies and it’s called Garden Warfare and it’s out today for Xbox One and Xbox 360. I’m waiting for the PC version which ahs no announcement date, it just says it will be available at a later date. Official PR below for you.. 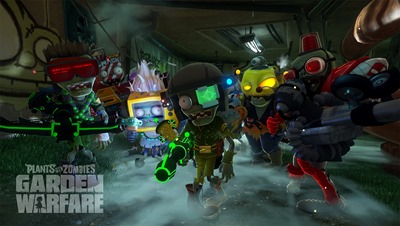 PopCap Games, a division of Electronic Arts Inc. (NASDAQ: EA), today released Plants vs. Zombies™ Garden Warfare, a best-in-class multiplayer shooter that combines the power of the Frostbite™ 3 engine with the fresh humor, wild action and vibrant landscapes of the incredibly popular Plants vs. Zombies series. Plants vs. Zombies Garden Warfare lets players choose a side and wage all-out war on their plant or zombie enemies in a variety of gameplay modes and with a jaw-dropping arsenal of outrageous weapons.

Plants vs. Zombies Garden Warfare features adored favorites in the series, such as the Peashooter and Sunflower, along with a new cast of characters including Ice Cactus, Hot Rod Chomper and all the Zombies players can get their hands on. Players can jump into three distinct modes including two 12 vs. 12 competitive multiplayer modes called “Garden & Graveyards” and “Team Vanquish,” or a four-player co-operative mode called “Garden Ops.” An amazingly deep set of customization options gives players an opportunity to personalize plants and zombies with fun costumes, items, hats and more, some of which give all-new abilities to each of the characters.

Two additional modes will be available exclusively on Xbox® One, the all-in-one games and entertainment system from Microsoft. The first allows for local cooperative split screen so players can team up with a friend on the couch, and the second is Boss Mode which allows for a third friend to join via a SmartGlass device to support their teams with a top-down view of the battlefield from where they can drop health, artillery strikes and more. Boss mode is also available on Kinect for a full screen experience.