So it seems that the Playstation Vita will be getting quite a few games at launch time with prices ranging from $9.99 to $49.99 for titles. I can say that I will not be getting the Vita at launch as I was burned on the 3DS launch. I’m probably never buying anything like that again on the launch date, even the free games didn’t make up for that pricing cut.

The gameplay experience on PS Vita is unmatched by any other mobile device in the market, providing new ways to interact through features such as its 5-inch OLED multi-touch screen and rear touch pad, dual analog sticks, dual cameras, and six-axis motion sensing system. PS Vita will also interact with the PlayStation®3 (PS3™) with compatible titles, offering multi-player gaming across both platforms and cloud-saving so consumers can play a game on one platform and pick up where they left off on the other.

PS Vita will draw consumers deeper into the gameplay experience by providing both 3G/Wi-Fi and Wi-Fi only models, enabling them to connect and play with the world around them, including their friends and other PS Vita owners. A variety of social networking and communications services such as Facebook, flickr, foursquare, Skype™, and Twitter will be available on PS Vita.

Consumers who purchase PS Vita will also be able to experience Augmented Reality (AR) right out of the box.  Included with every PS Vita system are six AR Play cards and one voucher to download a handful of augmented reality mini games via PlayStation®Network. 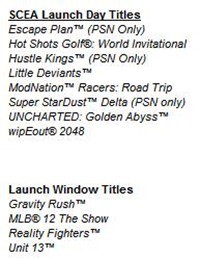 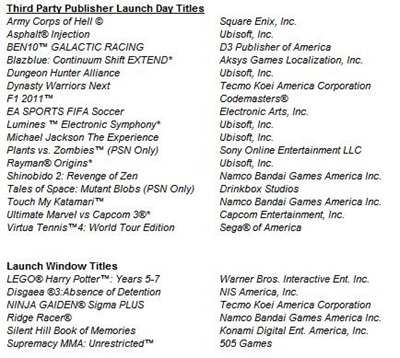 There will be a broad selection of official accessories that will be available at PS Vita’s launch, such as a Carrying Case, In-Ear Headset, and Cradle.

For consumers looking for a complete solution, a Starter Kit will be available for $39.99 (MSRP), which includes a 4GB Memory Card, Pocket Pouch, Protective Film, Card Case, Headphones, and Cleaning Cloth. Standalone Memory Cards will start at $19.99 (MSRP), providing plenty of options for storing games and save data, videos, music, photos and more. 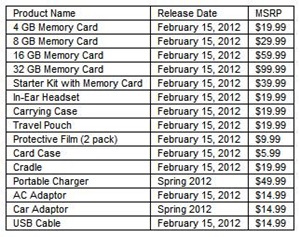