Wow! A DVD that can last for 1000 years?! So would you pay $22.95 each for a DVD that you can write once to and have it last 1000 or more years? Think about it, in a 1000 years will there even be something available to read it? It sounds like a good idea and all, but I think it’s a bit flawed as somehow I think DVDs won’t be around in 1000 years. The DVDs are made from rocks, well not really rocks, it’s a ‘rock-like’ material.. 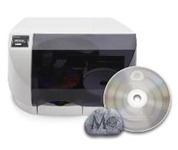 Bravo Archive-Series Disc Publishers and M-DISC media are available from Primera’s resellers and distributors worldwide and at www.primerastore.com.