Our friends up North seem be finally getting Roku as they’ve just announced they as of today they are officially available. You Canadians will be able to get either the Roku 2 XD or the Roku 2 XS with prices of $89.99 CAD and $109.99 CAD respectively. They’ll be available to purchase at Walmart and London Drugs by the end of the month. So are you guys up there excited or not to be able to stream just like us and play some Angry Birds? 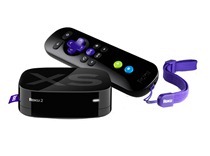 -Roku, the leading streaming platform in the U.S. today announced the official launch of its products in Canada. Two Roku streaming player models – the Roku 2 XD and the Roku 2 XS – are available for purchase in Canada starting today. These small set-top boxes use the Internet to stream entertainment to the TV instantly.

At launch in Canada, Roku features more than 100 entertainment channels including movies and TV shows from Netflix and Crackle; live and on-demand sports from the National Hockey League and Major League Baseball; music from Rdio and TuneIn Radio; photos and videos from Facebook and Flickr; news and weather from the Wall Street Journal and CNBC – plus casual games like Angry Birds, Wheel of Fortune and Jeopardy. Roku expects to broaden its channel selection in Canada at a pace similar to its growth in the U.S. – now at more than 450 channels.

“We have a simple formula for our best-selling streaming players: provide access to a ton of entertainment at a low price, while maintaining a best-in-class streaming experience,” said Chuck Seiber, vice president of global marketing at Roku. “We’ve set the same high bar for ourselves with the launch of our players today in Canada.”

The Roku 2 XD Streaming Player offers tremendous value for streaming video and music directly to a TV. The Roku 2 XD connects to the Internet instantly via built-in WiFi and supports up to 1080p high-definition video. The Roku 2 XS is the top-of-the-line Roku streaming player. In addition to the features of the Roku 2 XD, the Roku 2 XS comes paired with an enhanced remote with motion control for playing games like Angry Birds. It also features an Ethernet port and a USB port for playing music, videos and photos off of any USB drive.

The Roku 2 XD and the Roku 2 XS streaming players have suggested retail prices of CAD 89.99 and CAD 109.99, respectively. Both models are available now for pre-order online from Roku.ca, Amazon.ca, LondonDrugs.com and Walmart.ca; and are expected to be available at London Drugs and Walmart retail locations at the end of the month.