Do you find you never have enough power for your iPhone or iPod? Well Scosche might have a fix for your problem in two little devices called the flipCHARGE burst and rogue. These are meant to be extra or emergency power for your iOS devices and there’s even an app you can use with them. 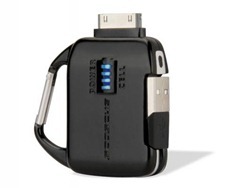 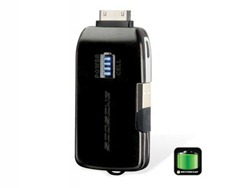 Scosche Industries, award-winning innovator of consumer technology, is excited to announce the availability of the new Scosche flipCHARGE burst and flipCHARGE rogue.  The new back-up battery and charger line provides iPhone and iPod users with instant power when on the go.  Both models feature a flush folding USB cable for synching, blue LED battery level indicator, a convenient carabiner clip and work with Scosche’s free reVIVE App for advanced power management.
“Not being able to make calls, send texts, watch videos, surf the web, access email or listen to music because of a dead battery can be extremely frustrating,” said Kas Alves, Executive Vice President of Scosche Industries.  “The flipCHARGE line addresses that problem in a smart, convenient form factor that is easy to always have with you.”
Scosche’s new flipCHARGE rogue sports a powerful 1800mAh lithium polymer battery, capable of fully charging a dead iPhone or iPod.  Like its namesake, the smaller flipCHARGE burst, provides an emergency 30% power burst to an iPhone and can charge a dead iPod up to70% full.  Both flipCHARGE models are recharged by plugging into to any computer, wall or car charger.
The Scosche flipCHARGE burst and rouge are available now at Scosche.com ranging from $44.99 to $59.99 respectively.