Wow, Serious Sam brings back a lot of memories, lots of fun times.  If you hop over to the Serious Sam website you can see before and after pictures, and I have to say they did a really good job on converting it to HD..

It’s time to get serious!  Majesco Entertainment, an innovative provider of video games for the mass market, today announced the availability of Serious Sam HD: The Second Encounter on Xbox LIVE Arcade for the Xbox 360 video game and entertainment system from Microsoft. Developed by Croteam, the creators of the Serious Sam franchise, and produced in partnership with Devolver Digital, Serious Sam HD: The Second Encounter continues the glorious high-definition chaos with a slick new graphic presentation, extreme multiplayer action, and an onslaught of all-new levels, enemies and bosses. Expertly re-vamped, the new and improved game cranks the Serious Engine 3 to deliver the trademark over-the-top-action that is synonymous with the golden age of first-person shooters.

Traveling through the crumbling Mayan ruins of South America, towering ziggurats of ancient Mesopotamia and the savage realm of medieval Europe, Second Encounter players will explore ancient worlds while fending off never-ending waves of Mental’s army. These warriors include old familiar friends like the Beheaded Kamikaze, Syrian Werebull and Kleer Skeleton, along with five new types of baddies and three new bosses for Sam to "play with." Luckily, our hero has a HUGE arsenal of 14 ‘bring-the-pain’ weapons at his disposal, including four new toys: the Sniper Rifle, Flamethrower, Chainsaw and the legendary Serious Bomb.

For fans looking for serious multiplayer action, the game’s co-op mode lets up to four players ratchet up the mayhem across 12 maps that include a brand spanking new Deathmatch mode along with Co-op, Capture the Flag and Survival. Exploding with hard-core weapons, treacherous enemies, loads of achievements and more than 100 delightful secrets to uncover, Serious Sam HD: The Second Encounter will remind players why they got into gaming in the first place: to have fun while blowing stuff up.

Serious Sam HD: The Second Encounter is rated M for Mature and now available for download from Xbox LIVE Arcade for Xbox 360 for 1200 Microsoft Points. The sequel joins the original Serious Sam HD: The First Encounter which released on the service earlier this year. For more information on the franchise, please visit the official site at 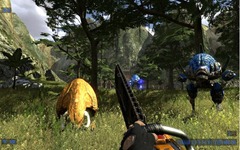 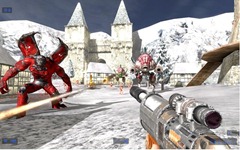