So I’ve been trying to get a hold of a Nokia Lumia 920 for a while and it hasn’t been in stock, it came back in stock but the price has gone back up, but now I see this new Sony Xperia Z and might have to get this instead. I may just have to go back to Android and give up on Windows Phone again… My older phones were Windows mobile and then I went to Android, and then moved to Windows phone with the Surround and now the HTC Titan, but I’m really liking this new Sony Xperia Z especially the fact that it’s water and dust resistant without a case! The phone has got some great specs as well like a 5” 1080P screen with a quad core CPU and a 13mp camera. I scanned the PR and didn’t see a price, unless I missed it, but it’s coming soon with a launch date of first quarter 2013. Full details and a nice picture for you below.. 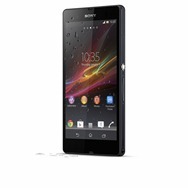 "With Xperia Z, we are bringing over half a century of innovation in TV, imaging, music, film and gaming to create a superphone experience that truly stands out," said Kuni Suzuki, President and CEO, at Sony Mobile Communications. "With great specifications, Sony’s media applications One-touch functions and outstanding battery life, Xperia Z is well positioned for leadership in the smartphone market. By putting smartphones at the heart of our strategy, Sony is enabling people to create, enjoy and share content and experiences like never before."

Xperia Z also includes Battery STAMINA Mode that can improve the standby time by four times or more*by automatically shutting down battery-draining apps whenever the screen is off and starting them up again when the screen is back on.

Sony media applications offer a consistent entertainment experience across a range of Sony devices. Pre-loaded on Xperia Z, the "WALKMAN", Album and Movies apps, enable discovery of on-line and off-line content through a single access point with new ways to enjoy and share that content. The "WALKMAN" application provides access to all your downloaded music, a library of 18 million songs to explore from Music Unlimited and Facebook social integration. The Movies application gives consumers access to over 100,000 movies and TV series from Video Unlimited while the Album application enables easy access to Facebook friends’ photos as well as browsing photos by location.**

One-touch functions enable consumers to easily share music, photos and videos from their smartphone to an array of NFC-enabled Sony devices, including speakers, headphones and now TVs. With the new BRAVIA TV, also announced today, simply touch Xperia Z to the remote control of the TV to instantly enjoy your photos and videos on the big screen.

Precision engineered with premium materials, Xperia Z introduces a unique OmniBalance design with subtly rounded edges and smooth reflective surfaces on all sides. Despite its slim 7.9mm body, Xperia Z is highly durable with tempered glass and anti-shatter film on the front and back, as well as the highest levels of dust and water resistance*** (IP55 and IP57) found in a premium smartphone.

In selected markets, a design variant of Xperia Z – Xperia ZL – will also be released in Q1 2013. Xperia ZLdelivers the same immersive entertainment experiences as Xperia Z but in a smaller form factor.

Xperia Z and Xperia ZL will launch on Android 4.1 (Jelly Bean) and will be upgraded to 4.2 shortly after launch for the latest Android user experience.

* Based on testing done with default settings, default accounts and applications for Skype™ and Twitter downloaded to the phone. The more applications installed, the bigger the effect of Battery STAMINA Mode.